While the whole world is focused on finding ways of protecting everyone from the spread of the Corona Virus, it might be equally useful to consider things that are worth spreading. Things like openness and kindness and acceptance. And let’s not leave out our shared humanity.

Join me this week as I share what happened when I opened my mind and heart to something taking place that was better than what I thought I was facing.

This morning, a friend sent pictures of her beautiful sourdough English Muffins, commenting about how much she likes making them. When I replied how much I enjoy sharing my own, as well as my recipe for them, she called the experience “contagious.” It brought to mind how I used to hand them over the back fence to my former neighbors every Sunday morning. That sparked something in my thinking and got me musing about some of my experiences during the past few days and about things that are worth sharing and worth spreading—”healthy contagion,” if you will. 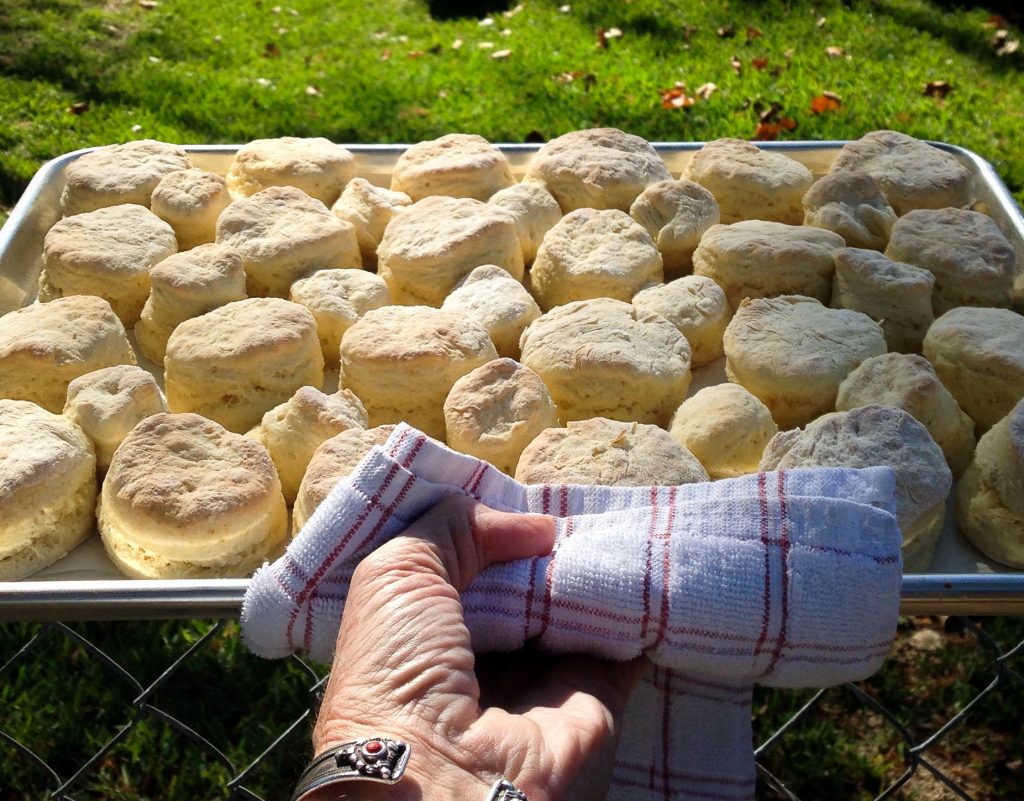 Offhand, I’m not aware of anyone who enjoys going for lab work at the Veteran’s Administration Hospital or to the Department of Motor Vehicles to renew their driver’s license, least of all during a pandemic. This past week (Drum roll, please!), I went to both of those places on the same day. And though I had prepared myself—or at least thought I had—each experience turned out to have something surprising waiting for me.

As I usually do, I called the Fort Worth VA a day ahead to confirm my semi-annual appointment but was told that orders for my lab work had not been sent over from the main facility in Dallas. When dozens of attempts by phone took me no farther than voicemail, I decided to follow my own wise counsel and let the matter go as best I could, trusting that things would somehow be resolved when I arrived on Tuesday. When I got there the following morning, I was told that the lab orders still had not been sent over and braced myself for the usual struggle.

After he informed me of it, though, the receptionist had a twinkle in his eye.
“How ‘bout we do this,” he said. “Go to the next clinic and tell them what you just told me. Since they can call Dallas directly, they just might be able to work some magic for you. After that, come back and see me. I’ll hold your place in line and we’ll get you right in and right out.”

By the way, I was happily surprised to find far fewer people in the lab than on my usual visits, and that strong measures were in place to protect patients and staff.

“Kissy,” the woman in the clinic—and no, I’m not kidding, that’s really her name—was glad to help. As she laughed with whoever she was speaking with in Dallas, she offered me a “thumbs-up” and asked me to wait a couple of minutes and then go back to the lab, assuring me the orders were on their way. As promised, she had solved my problem with willingness, a light heart, and a single phone call.

Then came the next surprise.

As the phlebotomist drew my blood, I told him that he had just performed what I call “an invisible stick.” I felt nothing. He was wearing a mask, but I could tell he was smiling. I told him that I’d been a combat medic and asked who he served with in the military. His answer surprised me.

“I was a medic with the First Cav in the middle east,” he said.
“I was with the First Cav in Nam, Laos, and Cambodia,” I told him. “First of the twelfth.”
He gasped.
“That was my unit,” he said, his gloved hand taking me by the arm.
When I asked how much time he spent “downrange,” he became quiet and the look in his eyes grew serious.
“More time than I can say,” he said quietly. “Only someone like you can know what I mean when I say that I’ve seen it all.”

In seconds, our shared history and our shared humanity took us deep into the most heartful conversation. When he told me that he’s still having combat nightmares, I offered my phone number and told him about my work as a counselor. While we were talking, the man who had helped me at the front desk walked by and overheard our conversation. He stopped and leaned in, offering a blessing and a fist bump to both of us. The experience was so rich that after I left, I called and spoke with a VA supervisor to share what had happened and to praise the staff that had just touched my life with such warmth and grace.

Then it was time to have my driver’s license renewed.

As I approached the screening tent outside the front door, a masked woman took my temperature and listened as I explained that the DPS website wouldn’t allow me to renew my license online after first telling me that I was eligible, and that adding to complication, my expiration date was quickly approaching.

“Go in and tell them to schedule you for an appointment,” she said, “but I need to tell you… we’re running a month behind.”
Once I was inside, another DPS worker listened to my situation and chuckled.
“Well, aren’t you luck,” she said. “How about later today?”
“No thirty day wait?” I asked.
“Nope,” she said. “We just had a cancellation. Can you fill these papers out and come back at 1:30?”

Once again, outstripping what I had imagined, my problem was easily solved. I went back for my 1:30 appointment and was in and out with a new license in hand in about twenty minutes. That’s a far cry from anything I’d experienced in the past. And once again, the people I spoke with were pleasant, fully engaged, and light-hearted.

What a surprising day.

On the way home, I had to laugh at myself about both situations. In another time—and not really that long ago if I’m to be open about it—I would have become so upset about what I thought I was walking into that I would have completely wrapped myself around the axle (pardon my motor vehicle pun). Relaxing and opening my mind to something better cleared the way for me to respond in gentler and easier ways. And then, when I was met with people who were making the best of an otherwise stressful situation, my heart opened even farther.

I’m not suggesting that changing my thinking changed the behavior of the people involved. What I am saying is that by letting go and relaxing a bit, it was much easier for me to stay in the present and easier to engage more fluidly with what was happening. As a bonus, I was more open to receiving the shared humanity of the people I met.

I can’t think of anything more worth spreading than kindness and acceptance and light. This past Tuesday, in two remarkably different situations, I had that lesson brought home to me again. Like the sourdough I bake with and in my friend’s pictures, kindness grows and spreads when it’s fed what it needs.

Choosing to relax and stay present opens us to what is good. Meeting people where and as they are, brings us closer to our shared humanity. And releasing the old stories and the negative ideas we’ve been holding onto and repeating to ourselves over and over allows greater clarity and greater compassion.

In my book, those are contagions that are worth being exposed to and worth spreading.

This week’s Beautiful Questions are about doing just that.

Question One: What, if anything, are you doing to block yourself from being a little kinder or from accepting the kindness of others?

Question Two: What things can you do or think that will create a shift in that direction?

Question Three: What can you do to be more kind with yourself this week?

As you consider these questions, and others that spontaneously arise as a result of them, write and tell me about it. I look forward to celebrating with you. 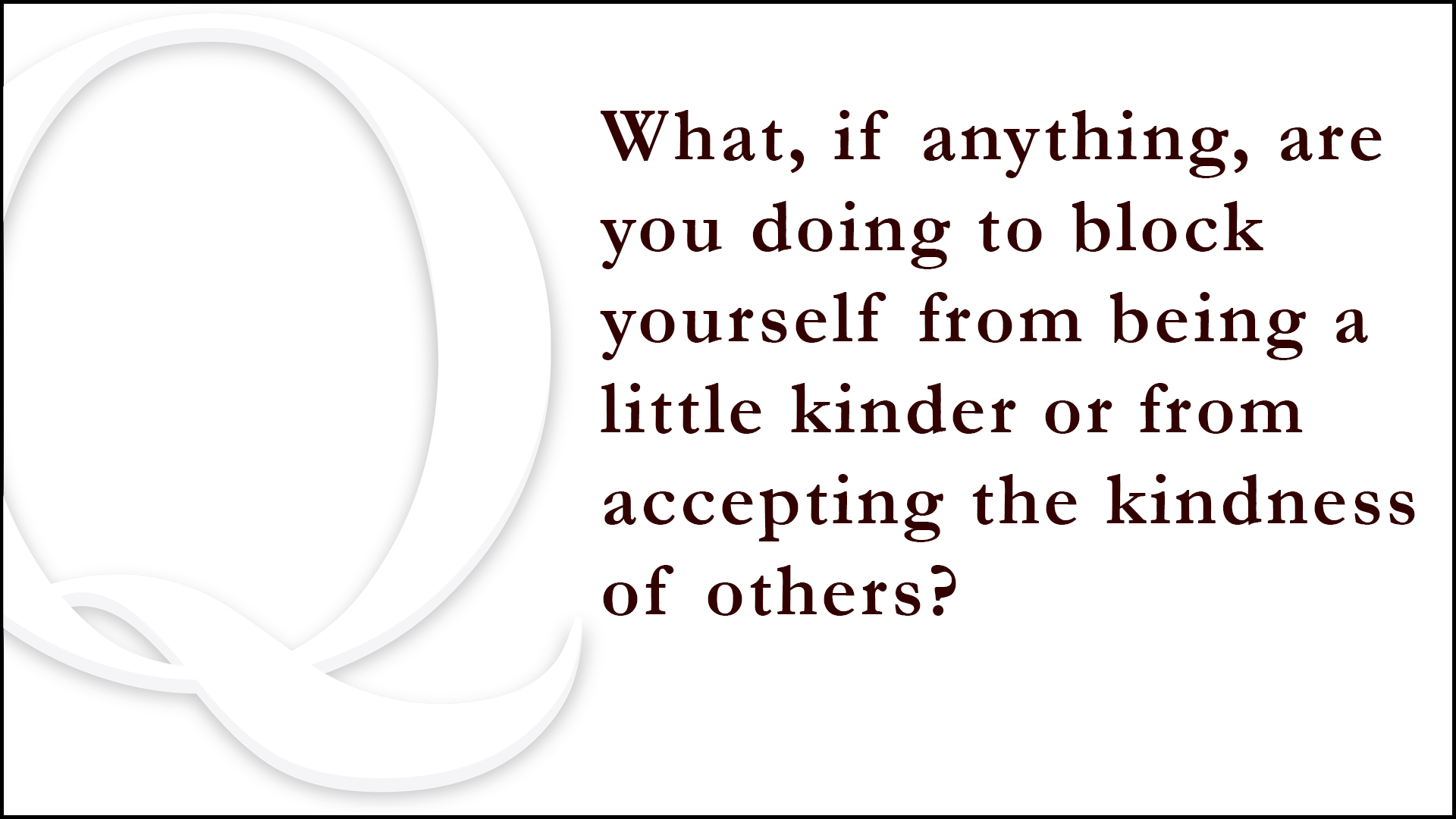