What is Personal Authenticity?

What will happen when you stop holding back and allow the world to see and engage with the person you really are? Not the invented story you’ve been telling yourself or the one that someone else constructed for you, but the real and luminous you, the authentic you.

Join me this week as we consider what it means to be authentic and what happens when we think and act from that place. Stay with me.

The moment we acknowledge and accept that what makes us extraordinary is built into each of us, the way we live begins to change for the better in a variety of ways. One of them is that we naturally relax. Another is that we become the person we’ve always been without apology or holding back or pretending to be something we’re not.

Isn’t it good to know that we don’t have to struggle to make that happen? And that it’s not about trying hard or jumping through hoops. And that it’s not about some kind of magic or some “mystical secret” that will suddenly attract wealth or success or fame or a loving relationship to us. I fully understand the principle of attraction, “That which is like itself is drawn,” but this is about something far deeper, something more fundamental than that.

It’s about being authentic. But, to avoid confusion, what does the word “authentic” really mean? This week, someone whose opinion I respect said, “You use that word a lot, but do people really understand what you mean when you say it?” It was a beautiful question I really needed to hear, especially since I’m so particular about language. So, to clarify, let’s take a better look.

When I consider definitions for “authentic,” two of the first things that come to mind are “real” and “genuine.” For example, when I finish a drawing or an oil painting or watercolor, I sign it so there’s no question that the work is genuine. Because I created it, I’m willing to put my name on it for all the world to see. Yet, what do words like real or genuine mean when we’re not talking about objects, but about human beings and how we go about living our lives?

Detail from the painting Cut Field

What does it mean for a person to be “real?” What does it mean to think or communicate or act in ways that are “genuine?” I also think the word “integrity,” where the inside and the outside match, and the word “sincere,” meaning that something or someone is exactly as you see it, unvarnished, unaltered, and in plain sight.

If someone asks, “How are you doing?” we often respond with some version of, “Fine,” but does that answer reflect what’s real for us, or is it a kind of mask that says, “Don’t come any closer. I don’t want you to see all of me right now.”

When someone asks, “What do you think?” do we give ourselves complete permission to speak what’s really on our mind, or do we alter or measure our answer to fit the person or the situation?

The truth is, most of us are constantly “editing” our responses, presenting what we want others to hear or see about us. When we stop to think about it, that’s a subtle form of lying. At the very least, we’re masking or half-stepping the truth.

On the other hand, what would happen if you took full ownership of yourself—your vulnerability and your strengths, your darkest fears and your boldest opinions, your deficits and your gifts—your truest self—and responded to life and to the people around you from that authentic place?

I don’t know how many people have told me in my work as a counselor and consultant that I “changed” or “saved” their lives. My answer is always the same: “No, I didn’t. You saved your own life when you chose to accept and own it, when you decided to think and feel and act in ways that are resonant and consistent with what’s true inside you, and when you stopped deferring to the rest of the world to tell you who you are or what to believe or how to best live your life.”

How many people have I seen turn their lives around by making that elegant and life-altering shift?

It fascinates me that some of them believed that they were stuck, and that lasting change was impossible. Some had even been diagnosed by one professional or another as “intransigently depressed.” There’s an unfortunate clinical term for you. Yet, when they made the decision to live their own lives from the inside-out, and then followed that decision with healthy actions, things got remarkably better, often with surprising speed.

It’s one of the reasons I continue the work I do.

Ask yourself what could possibly be more compelling or attractive or liberating about a person than the relaxed confidence that naturally arises from knowing themselves so well that they live from one moment to the next without pretending or editing or holding back.

Years ago, I had the good fortune to spend several minutes talking with the late Oscar de la Renta while he was here in Fort Worth. He took one look at me, pointed his finger, and said, “Photographer,” at which point he put his things down and asked me about my life and the work I was doing at that time. The people with him were tapping their watches and trying to keep him on schedule, but he would have none of it. It struck me that although he was very busy, he was fully “with me” as we talked. He had no other agenda in those few moments than the relaxed conversation we were having. After all this time, his way of being fully present stays in my memory and motivates me to do the same.

His noticeable luminosity had nothing to do with what was on the outside or how he dressed or how he lived or how wealthy he was. The “magic” was that he allowed himself to be genuine—to be exactly who and what he was, which is something that’s alive in each of us.

So, with that in mind, I invite you to consider this week’s three Beautiful Questions.

Question Two: If this kind of presence has been missing in your life for a while, what simple and consistent shifts in your thinking and behavior might help you it back?

Question Three: In what specific ways might you slow down and engage with yourself as openly and authentically as you would engage with someone you love or care about?

If you’ve ever wondered about the state in which so-called “awakened” or “enlightened” beings live, there it is. As you bring that kind of presence—that kind of authenticity—back to your life, write and tell me. I’ll be fascinated to hear about it.

My Light with Your Light 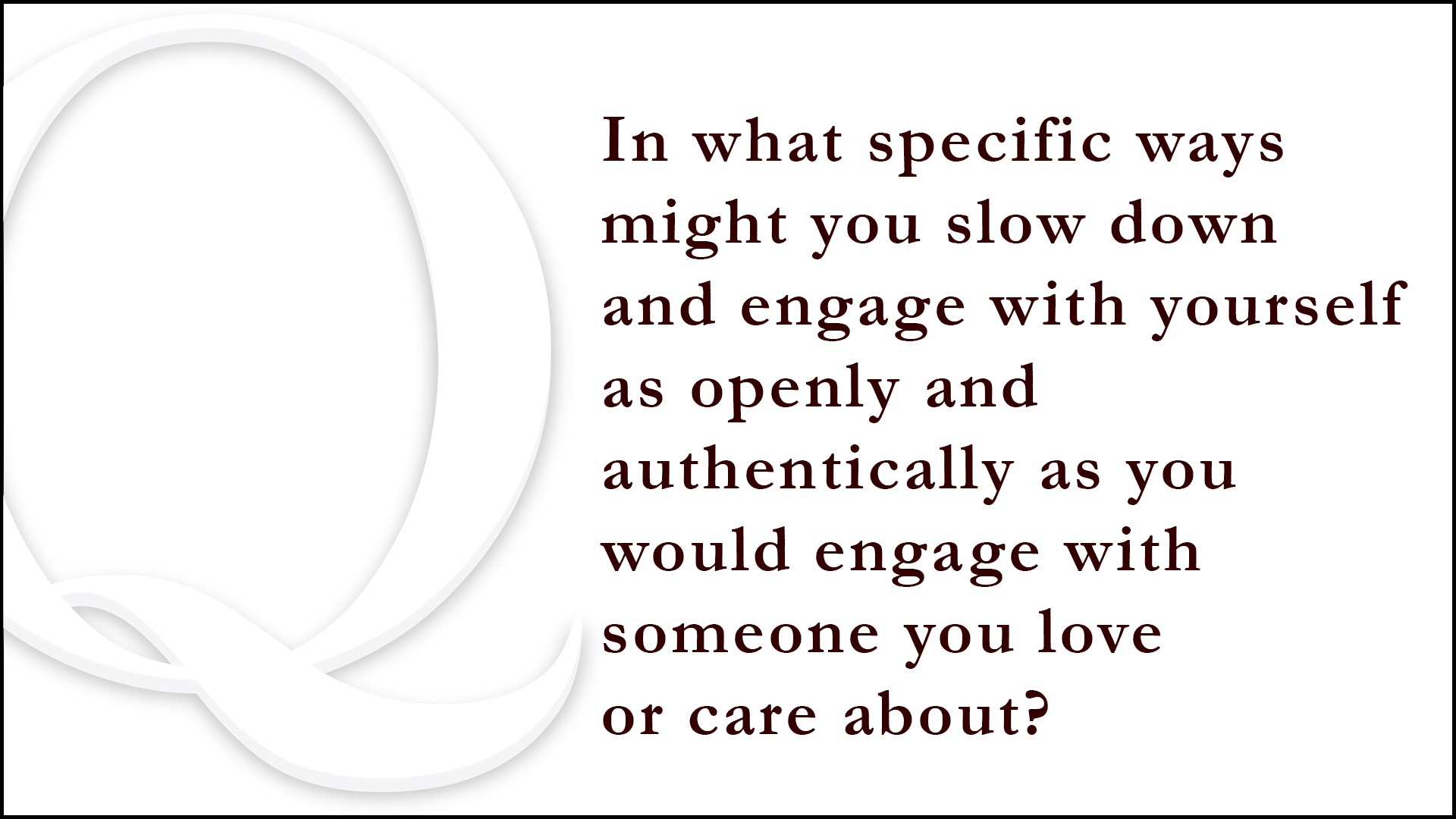