The Promise of New Life

In this time of tremendous change, there are things that are wonderfully consistent. One of them is the coming of Spring and the new life it brings.

Join me this week as we consider what that might bring to our own lives. Stay with me.

This week, I’ll start by sharing a poem with you about the calling of the doves and the coming of Spring.

The announcement came early
with a cooing so soft and low,
it took me by surprise.
I smiled and whispered,
“The doves are back.”

Calling from the high branches,
the doves are back,
inviting the promise of new life.

Announcing themselves again and again,
the doves are back
as a soft and steady rain
soaks the garden to its roots.

The doves are back
and Lady Banks is spilling herself
in buttery bouquet across the wall.

The doves are back, and a thousand things
burst into a symphony of color.

But isn’t that the way it is
when God speaks?

(The Announcement, from Uncollected Poems by Scott Lennox)

One of the great joys of Spring is the promise of life renewing itself yet again after the long and dormant stillness of Winter. All over the world, celebrations and festivals and traditions of many kinds mark its coming.

A year into the pandemic, and on the heels of such a harsh winter, I’m especially looking forward to the freshening of the season and the beauty and vitality that will most certainly come with it. We could all benefit from that inspiration right now.

Nearly twenty years ago, during the Spring after I had gone through surgery and radiation on my neck, I hardly noticed the changing of the seasons. All of my focus and all of my energy were on surviving and on getting through what I was enduring. Along with health issues, I also experienced a kind of depression my physician told me was to be expected, given all that was happening to me. He assured me it would pass, and I took him at his word.

As a way of coping, I followed my own counsel and made a conscious decision to be as easy with myself as I could. That meant taking very small steps and taking all the time I needed to get from one thing to the next. As you might expect, my progress was extremely slow, but I refused to give up and kept inching my way forward.

The combination of that decision and taking the actions I could made a quiet but remarkable difference.

By the following Spring, something in me had shifted. I was noticing everything—subtle and vivid colors, the changes in the sky from one moment to the next, the movement of clouds, bird songs and birds on the wing, the budding and blooming of flowers, the sound of rain, the rise and fall of the voices of the people around me, laughter, the fragrance of blossoms on the breeze, the sound of my own breathing, the aroma of coffee, the world becoming green and vibrant again, and of course, the calling of the doves.

Taking nothing for granted, I drank it all in as though my life depended on it. And in a very literal sense, I maintain that my life did depend on it. By consciously choosing and then allowing myself to engage with the freshening of the world, something deep in me was gradually renewed. I was reconnecting with life from the outside in and from the inside out. I was becoming supple again after feeling as brittle as a dried leaf for so long. 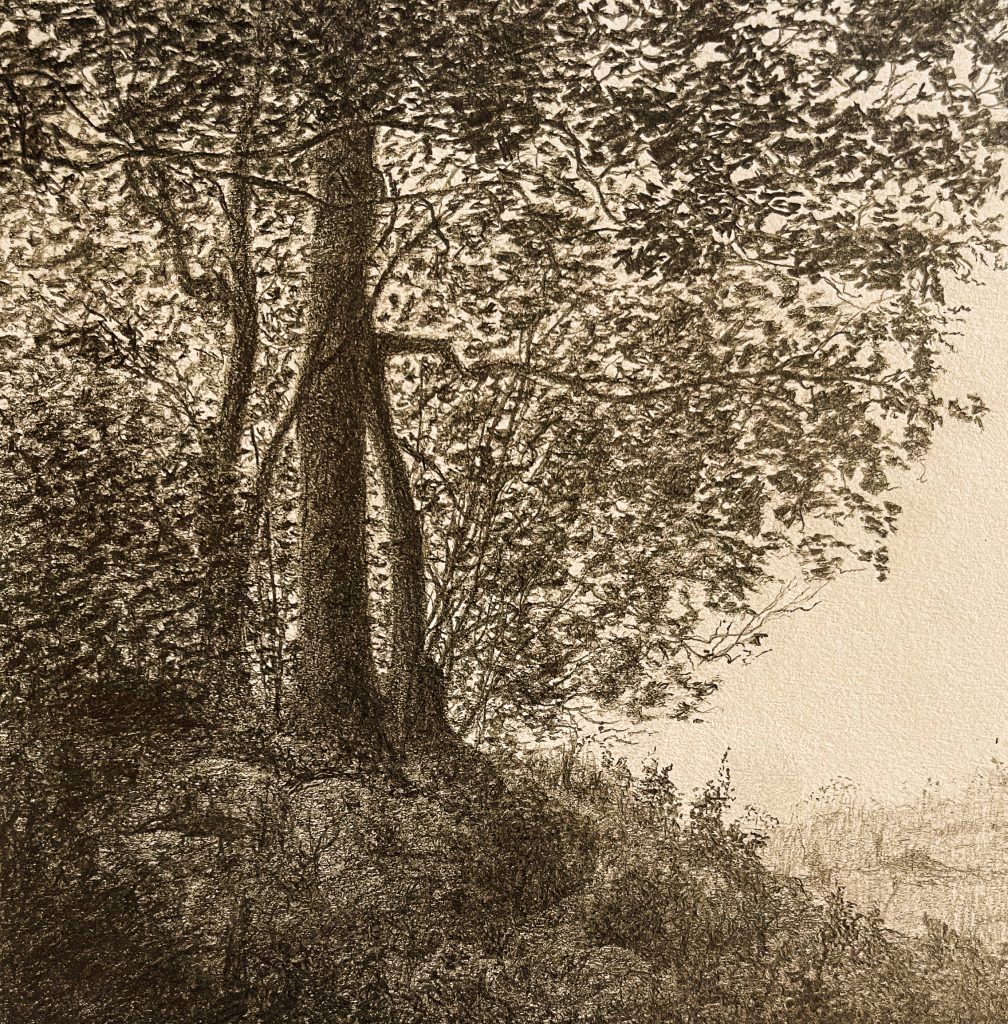 Inspired by the vitality of the natural world, it was during that remarkably challenging time that I began drawing and then painting, first in watercolor and later in oil. A five-inch square pencil drawing was one of my first studies. Working from a photograph, I concentrated first on the overall form, and then on each branch and leaf and clump of grass. With a pencil in one hand and a magnifying glass in the other, I slowly felt my way through the process until I finished it and then moved on to the next one.

One day, it occurred to me that while I was drawing, I wasn’t thinking about what I had been through. Instead, I was in what I call “the extreme present,” paying close attention to what I was rendering with my pencil. I also realized that my first little drawing was a visual metaphor for my emergence from the dense woods of where I had been into the light and the freedom of where I was headed.

As I kept drawing (and also writing), that conscious practice spilled over into the rest of my life. It wasn’t that I didn’t look back from time to time. Of course, I did. The difference was that I no longer allowed myself to be stuck there. Instead, I was intentionally looking for and focusing on what was vital and beautiful and enlivening. I was consciously reaching for every good thing.

Two of the best payoffs were that day by day, I became more comfortable in my own skin and more effective at coping with my life exactly as it was.

It’s not a stretch to say that in a multitude of ways, the past year has been traumatic for everyone. And yet, here we are at the beginning of another Spring—another season of life renewing itself. So, with that in mind, I offer the following Beautiful Questions as a way of allowing the best possible things to emerge from what we’ve endured.

Question One: Whatever is taking place in your life right now, are you willing to intentionally notice life emerging wherever and however it does in you and around you?

You don’t have to do anything but notice. As you do, it might be interesting to become aware of the energy of life moving within you.

Question Two: As you notice the good, what particular things stand out and what do you discover about them?

It might be useful to reinforce what you notice by writing them down in some way.

Question Three: As you consciously lean into what is beautiful or allow yourself to be in “the extreme present,” what relief do you feel, regardless of how long or how briefly the feeling might last?

As you continue to do it, notice how those periods of respite begin to stretch out, subtly changing the way you feel overall.

As Always, I look forward to hearing from you and where your considerations take you. Write and tell me about them.