The Power of Words

(Lose the Net by Rasmus Faber Courtesy of Epidemic Music)

Isn’t it amazing how good questions lead us so naturally to good answers, and how beautiful questions lead to even better answers! When we open ourselves to the things we don’t know, we’ve opened the doors to discovery and wonder and greater understanding.

I’m Scott Lennox and you’re listening to The Beautiful Question, a weekly consideration of things that matter every day.

As kids, we chanted, “Sticks and stones can break my bones, but words can never hurt me.” Oh, if it was only that simple.

Join me this week, as we consider the power words carry with them and ways of being more mindful about the ways we use them. Stay with me.

The act of putting a word together letter-by-letter is called spelling. Hear that again. “Spell…ing.” That’s right! We’re casting a spell.

It intrigues me that as we form ideas and put them into words, speaking them or writing them down, we’re engaging in a kind of fundamental magic. We’re weaving spells that bring about real changes. Words are so powerful that unless we’re conscious about them when we hear or speak them, we’re moved by them and come to believe what they imply, even when they have no basis in reality.

Unless we’re awake to the process, we’ll accept the spell the words cast as though it’s real.

Think about some of the things you were told as a child, especially things you were told about yourself and the world immediately around you. Looking back, what did you come to believe that wasn’t actually true? How did that “spell” shape what you thought to be your reality? And on the other side of the issue, think about the power of the words of encouragement you were told and the spells they cast. What did those words produce?

I think about the often-repeated quote by Henry Ford. “Whether you think you can or think you can’t—you’re right.” Putting that into practice, repeatedly tell a child (or anyone else) they can learn and grow without limits, and they’ll eventually accept what you’ve told them as fact and they’ll act accordingly. Tell them over and over that they have the ability to remember and you’ll watch their minds develop in the most remarkable ways. Tell them they are valuable and safe and kind and in control of themselves and you’ll see their confidence unfold and strengthen. 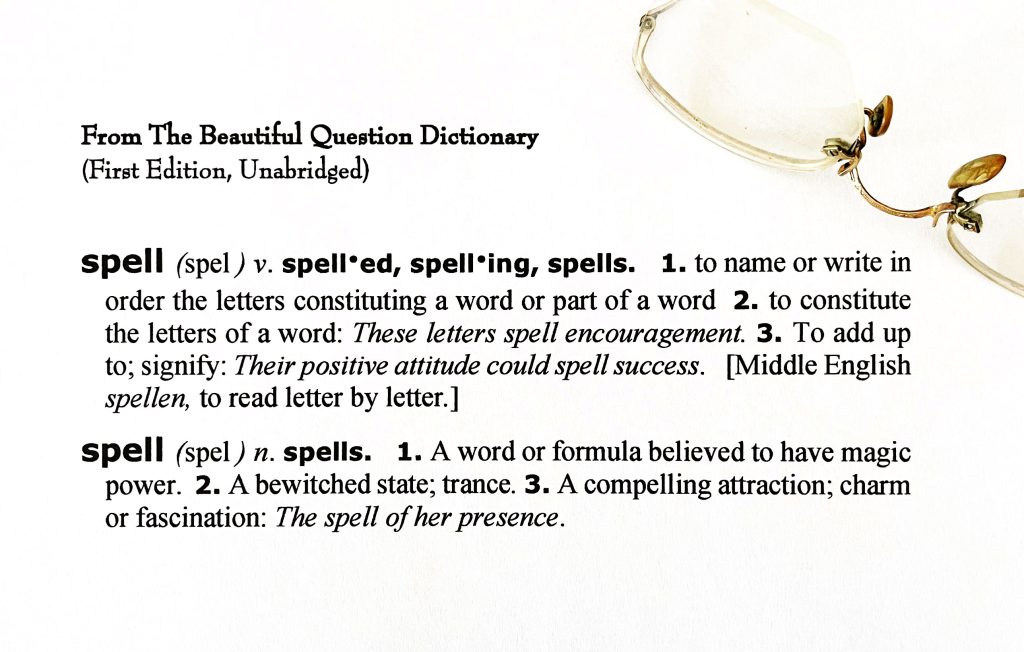 Each time I stop to consider the power words have, I feel a growing imperative to be consciously aware before I speak them to myself or someone else. The same is true as I write these newsletters and podcasts. Awareness of what my words produce is one of the things I choose to be the most intentional about. Since I’m casting spells with language, I can’t afford to be thoughtless or careless about what I’m doing or what I’m saying.

I’m reminded of the first line of the Hippocratic Oath. “First, do no harm.” That doesn’t just apply to practicing medicine. It applies to how we think and speak.

Often misquoted, the seventeenth century playwright, William Congreve, opened his play, The Mourning Bride, with a bit of magic. “Musick hath charms that soothe a savage breast,” he wrote. He was right about that, yet far eclipsing the effect music can have on us, the words we use have “charms” that can crush or inspire, imprison or liberate, impoverish or nourish. Words can cause us to freeze in our tracks or inspire us to act as boldly as we need to. They can cause us to feel hopeless and afraid, or loved and optimistic and embraced and encouraged.

As I write this, I’m thinking of times when I either comforted or inflicted pain on myself or someone else with the words I used, times when I was thoughtless about them, and times when I was extremely mindful as I carefully shaped what I was communicating. It’s the mindfulness that makes the difference.

Consider a cross-cultural example about the power of words I continue to find fascinating. Decades ago, the late British evangelist, G. Campbell Morgan, wrote of traveling in the middle east in a caravan. Someone in an approaching caravan called out a blessing in Arabic. More than likely, “Assalamu Alaikum,” as was the custom in that part of the world. But as the caravans grew closer and passed one another, it became obvious to the one who called out that Morgan was an outsider and was of neither their faith or nationality.

The passing caravan turned around and then followed Campbell’s caravan for a considerable distance. Shouting loudly, the man who called out the blessing begged to have it given back. To him, and to his people, a spoken blessing was an altogether tangible thing.

You don’t have to be an Arabic speaker to understand that words have tangible power, or that once spoken, they can never be fully taken back. I’m thinking of things I’ve said or were said to me that still hang in my memory. In some of those cases, amends were made. But there were exchanges that could never be resolved or healed for one reason or another.

At the same time, I think of things that were said that inspired and encouraged me and still do. Some of those words were spoken sixty or seventy years ago yet are with me as freshly as though they were spoken just this morning.

So, that brings us to this week’s three Beautiful Questions. I invite you to consider them.

Question One: Can you think of things you’ve said or things that were said to you that resulted in emotional hurt or pain?

Question Two: Can you think of words you’ve spoken or things that were said to you that resulted in feelings of encouragement or comfort or hope?

Question Three: What might you do this week to become more aware of the influence your words have on yourself and on the people around you?

Write and tell me where your consideration of these questions takes you. I look forward to hearing from you.

I’m happy we can engage this way every week as we consider things that matter and what to do about them. If nothing else, I hope you feel inspired to look more deeply at ways of caring for yourself. You deserve that.

And each week at thebeautifulquestion.com, you can read the illustrated transcript of each podcast as you listen. We’ve also included an archive of all previous podcasts, including guided relaxation audios that can help you practice letting go on a daily basis.

If you find these podcasts useful, I encourage you to share them and tell others about them. That’s a great way of helping me get a voice of calm and collaboration and balance and encouragement out into the world.