Taking Off the Masks We Wear

Have you ever found yourself putting on a “mask” to protect yourself in some way or to project something that isn’t authentically you?

Join me this week as we consider masks of all kinds, why we wear them, and how to go about removing them.

For quite a while, I’ve thought about the masks we wear. Not the physical ones, but the invisible ones. For a variety of reasons, we put on masks of false confidence that hide our fears of one kind or another. We wear masks of social standing or power or authority. We put on masks we think will help us to “fit in” with one group and separate us from another.

We don masks to keep others from discovering what we really think about ourselves or about them. We wear bold masks that defy social norms or conventions. We outfit ourselves with masks of bravado or piety or suffering. We put on the mask of an artificial smile or one of ferocity or one that says, “Get away from me.”

The array of them is vast, yet who is it that’s hiding beneath them?

Years ago, I was invited to join a number of other artists in creating masks for a gala fund-raising ball for the Fort Worth Opera. New to mask making at the time, my head was ablaze with ideas. I was also the commercial photographer assigned to shoot the program for the auction, which afforded me the opportunity of previewing the work of other artists. That got my ideas moving even more intensely.

Because of my participation as an artist, I was also invited to attend the masquerade ball which was to be held at one of Fort Worth’s country clubs. A black-tie affair, one of the requirements for attending was that everyone was to wear a mask of some kind.

Having created it myself, the mask I wore was highly detailed over a base that was fashioned from molding leather that I fitted to a life-casting of my own face. After padding it and lining the inside with silk, I covered the outside with pheasant feathers which I painstakingly glued into place one at a time using tweezers. When the mask was finished, the feathers looked as though they had organically grown into place. The effect was quite compelling.

The ball was a lavish affair largely attended by Fort Worth’s “upper crust.” Even though I had known many of them since our elementary school days, I nonetheless felt myself to be “out of my element.” While it was by no means true of all of them, many of those attending saw themselves as part of an elevated social strata of which I would never be a member.

At eleven o’clock, there was to be a grand unmasking, following which there would be dancing and a late breakfast. I joined in, but with an intentional twist.

As a social statement, I purposely wore a second mask beneath the more intricate outer one. Fitting me like a second skin, the inner mask was a demi-mask molded from thin leather which I gold leafed. At the appointed hour, I took off the outer mask, but left on the inner one and stopped speaking, communicating only with slight gestures and my eyes.

I wasn’t exactly surprised when a number of people became noticeably upset that I hadn’t completely unmasked myself. I couldn’t tell whether or not they caught my point, but there was no missing the fact that despite the “rule” of the evening, I was still hiding my nose and the upper part of my face behind a mask. More than one person proclaimed that I wasn’t “playing fair.” One man even threatened to remove it himself but was stopped by friends who were amused by what I was doing. The look in their eyes told me that they understood and agreed with me.

Though it was by no means intended to be hostile or aggressive, the point of my staying masked was my way of demonstrating that most of us wear masks all the time. In some cases, we wear layers of masks that prevent anyone else from knowing the real identity of the person beneath them. And in some cases, the person wearing them becomes so strongly identified with their own masks that they seem to lose touch with who is under them.

Having done that myself, it was something I could related to.

Have you ever thought about the masks you wear and why you put them on in the first place? If you’re still wearing them, are they necessary now? Are you even aware when you’re doing it?

For many of us, the answer to each of those questions is, “No.”

I vividly remember the first time I intentionally masked myself. Nine years old, I had been assaulted and was terrified that others would discover it. To “protect” myself, I put on the mask of “I’m fine,” even though the truth was something quite different.

Beneath the mask, I felt perpetually frightened and angry and alone. Soon after, I began to fashion other masks as a way of fitting in with the people around me. It was actually quite easy. All I had to do was watch them carefully and then do what they did, carrying myself in ways that looked more confident and more relaxed than I actually was.

Over time, I became so accustomed to it that wearing masks became second nature to me. It would be years before I began to address the fear and the pain that lay beneath them. When I did, the masks began to fall away. They were no longer necessary, though some habit of wearing them persisted for a while.

If you’ve been wearing masks and you’re ready enough and courageous enough to begin living without them, I offer this week’s Beautiful Questions as a way of releasing yourself from a habit you no longer need and is no longer useful.

One: What masks have you been wearing, and what do you know about how you first put them on and why?

Three: What is necessary, right now, for you begin shedding them or a the very least, to wear them only when you feel it to be absolutely necessary?

Four: What is the true nature of the real and authentic person you been hiding beneath them?

While I’m certainly not advocating that you take them off at a particular time or in a particular way, I do encourage you to at least consider these questions as a way of liberating even more of yourself. Whoever you are, and whatever you’ve lived, you deserve that kind of freedom. 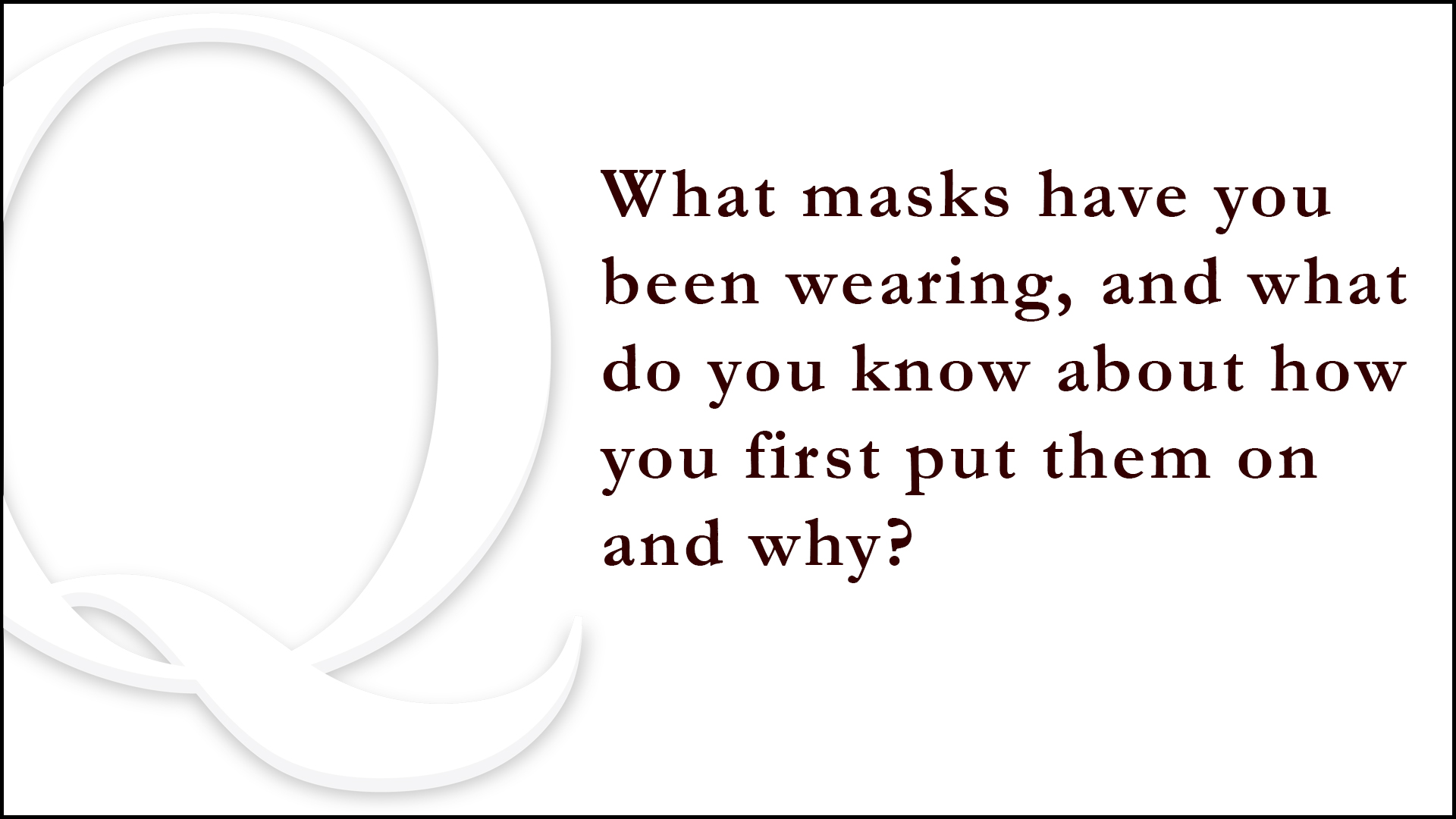