Staying Calm in the Face of it All

We talk about being calm, but apart from being a cliché that we verbally toss around, what does that really mean?

Join me today as we consider not only the word and its meaning, but effective ways of achieving that state inwardly and outwardly. Stay with me.

To set the tone for this week’s consideration, here are a few examples.

When I think of my childhood, one of my vivid memories is hearing my father’s voice as he admonished my brother and me to “Calm down!” as we boisterously played in the living room on Christmas morning. Truth be told, that was far from the only time he said it.

Sailing alone on a large Texas lake one beautiful spring afternoon, the wind suddenly died. Naturally enough, the sails fell slack and my boat stopped moving. For the next hour or so, I was “becalmed” and would be going nowhere until the wind rose again. Laughing at my situation, I set the anchor and went below deck where I took a peaceful nap as the boat slowly rocked from side to side.

Recently, I wrote about the so-called “boat people” who escaped Vietnam. A friend of mine who now lives here in Fort Worth was one of those people and is alive because the captain of a Dutch freighter defied international orders by picking them up and taking them to Thailand and eventual freedom. In doing a bit of research about my friend’s experience, I discovered that if one of the people on those grossly overcrowded boats managed to stay calm, others would be much more likely to do the same. That controlled emotional state often meant the difference between life and death.

As a combat medic in Southeast Asia, I quickly discovered that if I remained calm and focused, my eyes and body language would convey that not only to the wounded I was treating, but to the other soldiers with me, including officers and staff. I knew innately that if I panicked or showed fear, the men around me would feel it and become less confident.

Preparing for World War II in 1939, the British Government produced a widely distributed poster that was intended to raise the morale and promote unity among the British people, who were threatened by massive air attacks on major cities. You may have seen various contemporary versions of it. In bold white letters on a red background, with the crown of the monarchy above the lettering, the poster said, “Keep Calm and Carry On.”

We talk about staying calm or becoming calm, but what does the word “calm” really mean in a world of everyday concerns? And how do we go about achieving it? Let’s start with a brief bit of scholarly inquiry. 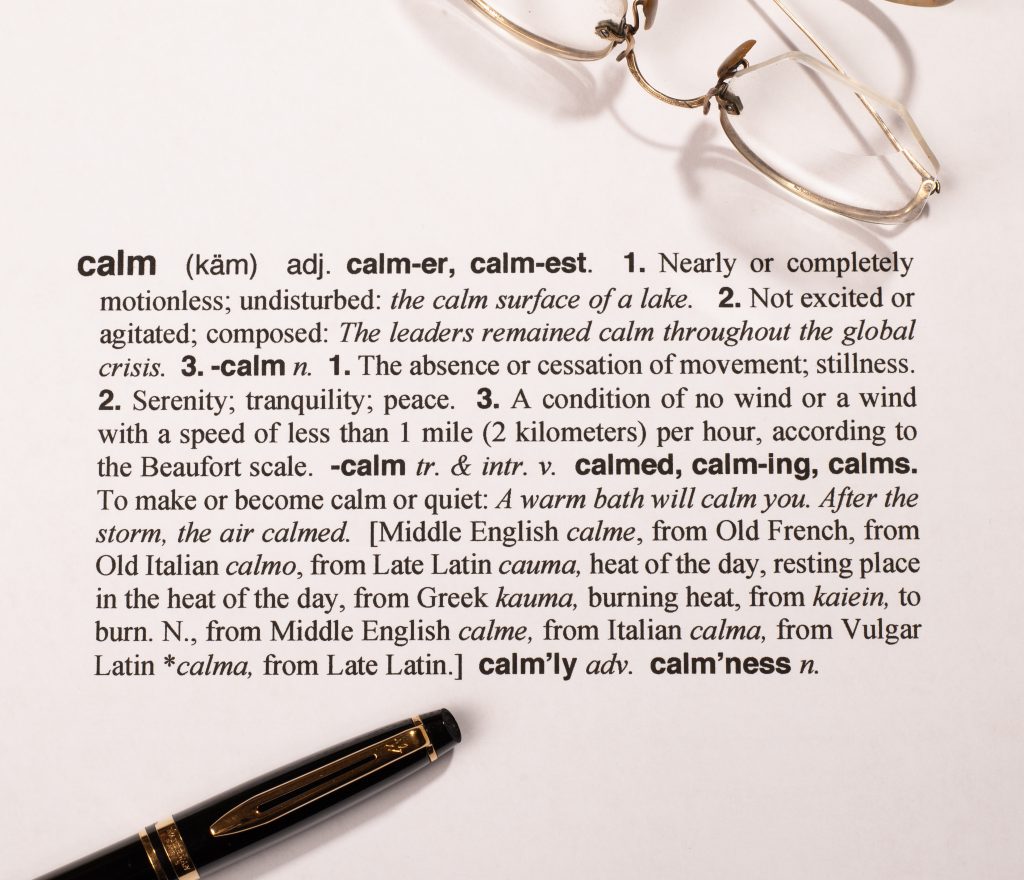 Modern dictionaries define the word “calm” in various ways. One is “not showing or feeling nervousness, anger, or other strong emotions.” Another is “the absence of violent or confrontational activity within a person, place, or group.” Still another is “remaining peaceful and focused in the face of conflict.” And yet another is “pleasantly free from wind,” as when out in the open. As a verb, the word has been defined as “to make tranquil and quiet; to soothe.”

But none of those definitions shed light on the “how” of becoming or remaining calm or regaining a sense of calm. As it turns out, being calm has more to do with choice than we sometimes want to admit. Some time ago, I heard a conversation that demonstrated my point. A couple was talking at the next table in a restaurant.

“I didn’t mean to get so upset,” the man said.
“I accept that,” she told him, “but you didn’t mean not to get upset. So you did get upset. The question is, did you mean to stay calm? Either way, it’s a choice.”
Without giving myself away, I wondered how he would respond.
For a moment, he looked like the proverbial deer caught in headlights. Then he smiled and quietly answered.
“You know something,” he said, “you’re right. I didn’t choose to stay calm. I’ll be more aware of that from now on.”

While I’m not in the habit of eavesdropping, I have to admit that what I overheard taught me something about the nature of intentionality. Their conversation anchored for me that there are two sides to intention, what we choose to do, and what we choose not to do, which plays into the heart of staying calm and focused and centered.

On the eve of the election, a friend told me that she was filled with fear and anger about what’s happening in the country right now. I asked how long she was going to surrender her emotional state to the situation. Especially when she always has the option of choosing to remain calm—the option of engaging with the inner peace that is always available. Agreeing to refocus her thoughts in a more useful direction, she wisely chose to calm herself and reengage with the stillness that is her normal state. To put that into action, she said that she would think about it and meditate on it for the rest of the day and through the election and in the days that followed.

The old adage about “slowly counting to ten” can be a bit hollow if nothing else is done. By itself, the passing of time is simply not enough to make the difference. Yet, choosing how we focus our attention during that ten-second countdown can make a world of difference. I’ve written before about consciously extending a long and slow outbreath as a way of relaxing ourselves. Its effectiveness has been demonstrated over and over. It’s a built-in “technology” that can be put into place anytime you like and as often as you need it. Along with that, I’m wondering how many other possibilities for self-calming you’re aware of.

So, with that in mind, here are this week’s three Beautiful Questions.

Question One: What have you done in the past to calm or relax yourself in healthy ways?

Question Two: What worked the most noticeable and effectively?

Question Three: What can you do this week, perhaps over and over, to allow yourself to return to being physically, mentally, and emotionally relaxed as you go through your days?

As always, I would love to hear your answers. Write and tell me about them. 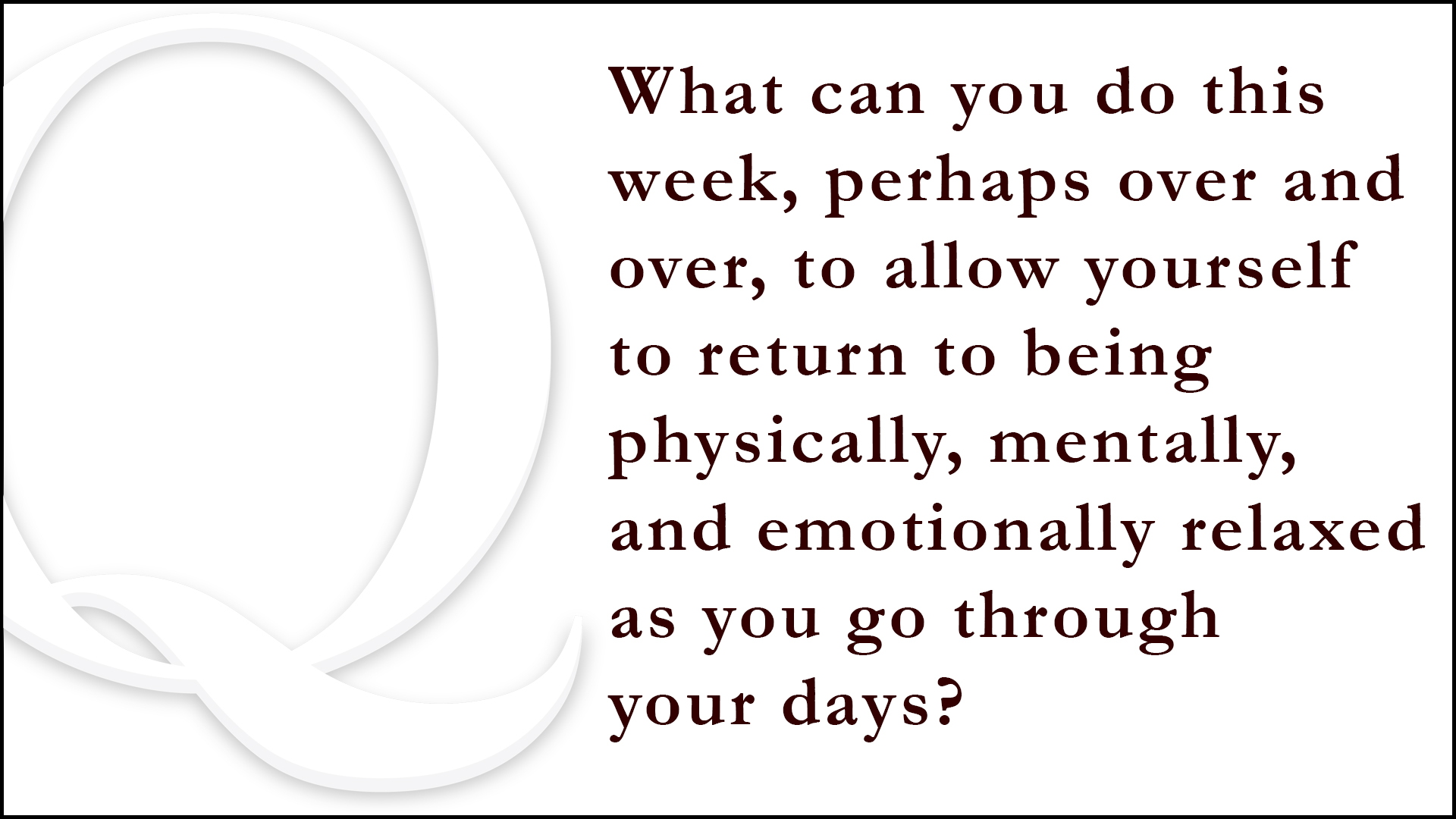