What happens when we hold on tightly to the pain of the past? What freedom do we discover when we take conscious steps to release ourselves from it?

Join me this week as we consider some of the myths about forgiveness and then look at what it really means.

For the past few months in counseling sessions I’ve been leading, the subject of forgiveness has come up so often that I wonder what might be inspiring it. Time and time again, I’ve listened as some of my clients have shared their misconceptions about the nature of forgiveness.

They say things that range from the old standby “Forgive and forget,” to “But If I forgive the other person, they win and I lose” (whatever “win” or “lose” might mean). And let’s not forget the frequently stated, “Forgiving would be admitting that what they (or I) did is okay. I can’t do that.”

Think it through and you’ll see that each of those fallacies, along with many others, has at least one very powerful mental and emotional trap built into it. Being unwilling to forgive makes letting go and healing much more challenging and lengthens the time of suffering for the one who’s still holding on.

More often than not, when the subject of forgiveness comes up in a session, I’ll share a bit of my own history and some of the misconceptions I held about it. While I intentionally avoid going into details, I have no problem discussing how hard it was for me to forgive myself and then forgive others as long as I continued holding on to my irrational ideas about forgiveness.

For years, I believed that forgiving was an act of failure because it meant that I was letting the other person off the hook and that I was condoning what happened. You may have even thought so yourself.

I remember saying on numerous occasions that I could never forget what was done to me and that I certainly couldn’t forget my own mistakes, many of which had been intentional. For that reason, if forgiving meant that I was supposed to “forgive and forget,” then forgiveness was impossible. So, why bother?

Then someone showed me what forgiveness really is, as well as what it isn’t. 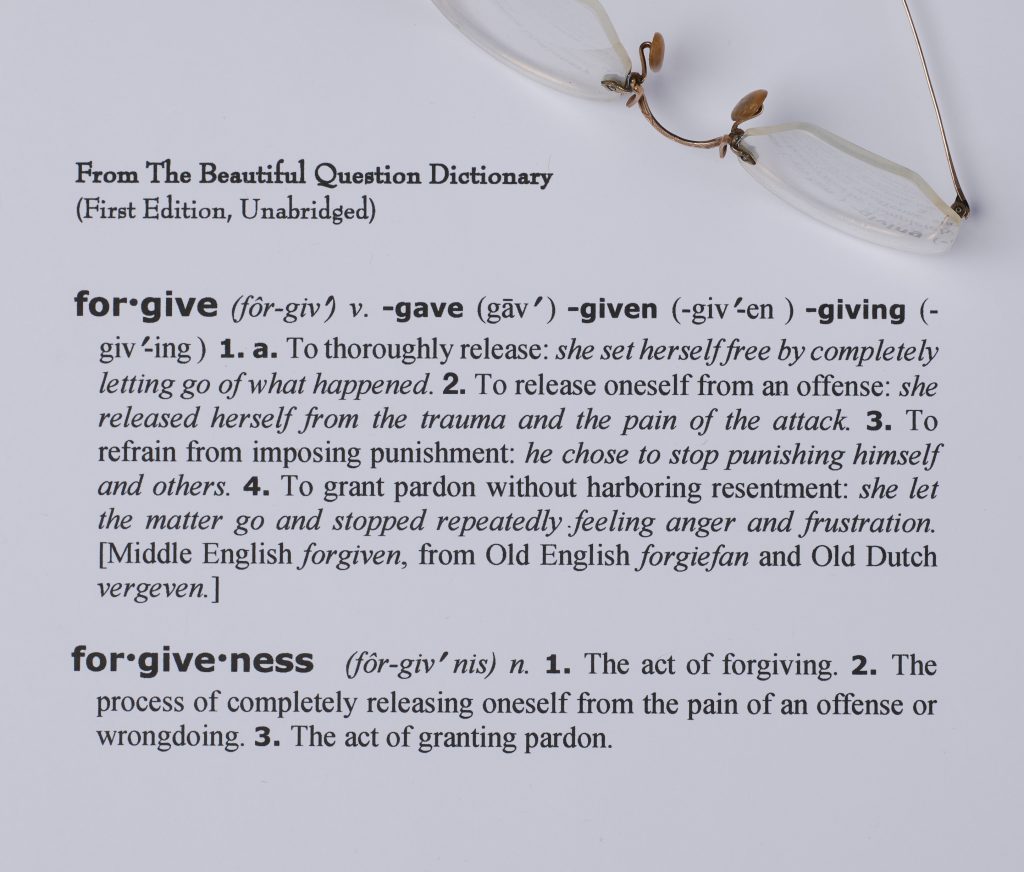 Beginning with what it isn’t, forgiveness has nothing to do with giving up or giving in. It’s not a declaration that the harm done is acceptable. It isn’t about winning and losing. It isn’t about declaring guilt or innocence.

Our word “forgive” is derived from the words “forgiefan” from Old English and “vergeven” from Old Dutch. In essence, “forgive” means “to thoroughly release.”

That’s it. That’s the whole thing. So in that light, let’s look at what forgiveness really is.

It’s about giving away the “right” to punish, whether that’s about punishing ourselves or anyone else. That means letting go of our search for vengeance and intentionally stopping our endless cycles of self-punishment.

It’s about no longer dwelling on the same old thing. The word “resentment” literally means “to be in the process of feeling the same thing over and over.” When we forgive, we put an end to those painful cycles.

Forgiveness is about living as fully in the present as we can. As we do that, we stop artificially dwelling in the when and where of the original event and return to the here and now.

It’s about creating dynamic balance. By remembering what happened and learning from it, we free ourselves to move forward with the information about it, but without the pain of it.

It’s about getting healthy again and making ample space for our own lives. That happens naturally when we release ourselves from the dead weight we’ve been carrying mentally and emotionally, and sometimes physically.

It’s also about enjoying a better night’s sleep because our minds and hearts are no longer pre-occupied or entangled with the pain of the past. I can tell you from experience that the relief it brings is priceless.

Ultimately, forgiveness is about offering grace to ourselves. And then, because we’ve made it possible, we’re better able to offer grace to those around us. The more present we are, the more available we are.

The more forgiving we are, the more capable we are of offering kindness to ourselves and to the people around us.

The more forgiving we are, the feel less guarded we feel, and more we step into healthy control of our own lives.

The more forgiving we are, the less we punish ourselves with endless cycles of memory and pain about things that are long over.

The more forgiving we are, the more fully alive we are.

Do you want that?

This week’s Beautiful Questions are focused on how to achieve forgiveness as an act of self-liberation, if nothing else.

Question One: If you were going to forgive yourself for one particular thing that you’ve been holding onto, what would it be, and what measurable step would you take to let it go?

Question Two: If you were going to forgive someone else for something they’ve done, once again, what would it be, and what measurable step would you take to release yourself from it?

Question Three: Once you’ve carried out those acts of forgiveness, what will you do to consciously remind yourself that you’re no longer holding on to the past or the events of it?

As always, I’d love to hear what arises in your awareness and what changes take place as you consider these questions and put them into action.