In my work as a counselor, one of the things I encounter, over and over, is that somewhere along the way, people have gotten out of touch with themselves. Join me this week as we consider ways of living from the inside out without asking any for permission or seeking anyone’s approval to do it.

A long time ago, I lost count of how many people have told me they don’t feel worthy or seen or valuable, or that they feel alienated in some way. I don’t know how many have shared with me that they feel stuck and don’t know how to regain what they knew about themselves or how they behaved before something happened to change them.

For some, the changes were brought about by either chronic or acute trauma, but for most, the shift took place slowly as they tried, for whatever reason, to adapt to the world and the people around them, abandoning their originality in the process.

I can relate to that. Perhaps you can, too.

There was a drawn-out time in my own life when I put more and more of myself away, naively hoping to find some way to “fit in.” I remember thinking that if only I wasn’t so different, I’d gain the acceptance of other people and I’d stop being judged. As you might imagine, I finally reached a point where I hardly recognized myself and had no idea how to get back to what I’d been before I changed so radically. Far from being unique, this is an unfortunate scenario that plays out in the lives of countless people every day.

But it doesn’t have to be that way.

So, to set the tone and the pace for this week’s consideration, allow me to share a poem I wrote about things that happen in completely natural ways. For the next few minutes, you might want to take in these words like a movie in your mind. We’re not in a hurry.

Gliding above a languid river, with no one watching,

its crimson beak afire, a black swan, enrobed like a priest,

slips dreamlike through the mist without beating a wing.

Unseen in the high canopy of a distant rain forest,

an orchid, resplendent, translucent, ever silent,

slowly turns and offers its face to the sun.

Hidden in the rolling ocean of tall prairie grass,

with no human habitation for miles in any direction,

a Crested Lark fills the air with the sweetest song.

In the dew-kissed western pasture, a frolicking new colt

then pitches its head and does it all again, and yet again.

an old man refuses to feed their hatred with his fear

and walks calmly between them, his head held high.

In line in the noise and clatter of an airport cafe,

a woman pays for the meal of the man behind her,

then quietly walks away, keeping her secret to herself.

In silent reverie, two lovers sit close in the park,

leaning into one another, their fingers interlaced,

as they watch the sun surrender to the horizon.

In the moonlight streaming through the window

and spilling across a new crib, a first-time mother

watches in awe as her newborn peacefully sleeps.

And just now, beyond the window at my writing desk,

two butterflies flit ‘round and ‘round the Passion Vine

from which they emerged and took flight only yesterday.

In every moment, whether near or far away,

and without explaining or asking for permission,

things are happening in the most natural way,

like the slow and steady unfolding of our lives.

(In The Most Natural Way from Uncollected Poems, by Scott Lennox)

For the past few months, I’ve spent hours considering what it means to live authentically and to be in resonance with what we were before the world imposed its judgments and standards and rules on us. Putting that another way, I’ve been pondering what it means to live from the inside-out—closely aligned and in resonance with our truest self—before we began deferring to the way others want us to be.

As I illustrated in my poem, it’s possible to think and act without asking permission to be what we are. It’s possible to live without trying to be something we weren’t born to be. It’s possible to be fully alive and beautiful and strong and free and self-accepting and wonderfully wild in the world.

Yet, I’m also aware of how strongly and constantly we’ve been externally shaped and reshaped from the moment we were born.

Ask yourself how different your life be if you allowed yourself to live as the person you truly are on the inside—innately whole and complete and valuable. In what different ways would you live if you refused to dumb yourself down or put parts of yourself away in efforts to avoid judgment or to gain the approval of others?

What good things will you experience that you’re not experiencing now when you choose to stand and think and act from the fullness of your being? And for that matter, what will change when you consciously choose to accept others for who and what they are, allowing them to live however they live without feeling compelled to change them?

We have only to listen to the whisperings of our heartmind and follow what we innately know to be genuine about us. And isn’t it refreshing to know that we don’t have to do that perfectly? It’s ours to accomplish in our own natural way.

So, if you’ve had enough, and you’re ready to regain yourself—to be in full possession of who and what you are—this week, I offer four Beautiful Questions. In fact, because they are some of the most essential questions we can ever ask ourselves, I recommend allowing yourself to slow down, just a bit, as you wisely and compassionately consider them.

Question One: Without apology and without editing or holding back, what do you KNOW to be true about your most essential self—what do you KNOW about the things in you that never change?

Question Two: To the degree that you know it, what caused you to put away or deny some of the parts of your truest self?

Question Three: Because you are the only one capable of doing it for you, what parts of yourself are you willing to bring “back online” this week and keep them in place?

As I said a few moments ago, these are some of the most important and self-liberating questions anyone can ever ask. And so, I thank you for being willing to look there and for re-engaging your fullest self. But I’ll admit that I have a vested interest in what you’re doing. You see, every moment that you live more effectively and are more content and more happy with yourself, the world I live in becomes a happier and more peaceful place.

That’s a gift worth celebrating.

My Light with Your Light.

[ theme music rises and then fades ] 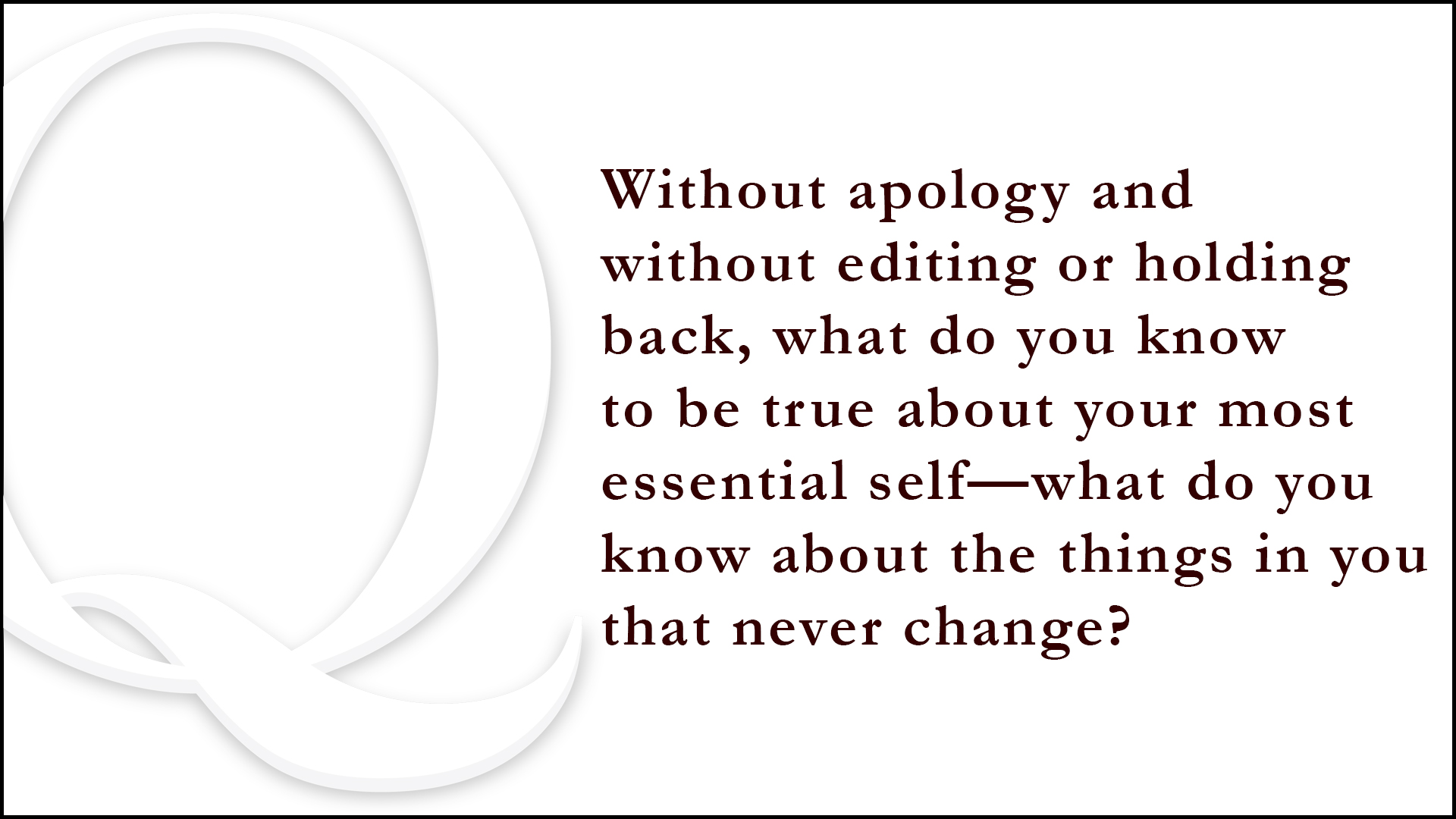