What marvelous things are safely nested someplace deep within you, things that are just waiting to hatch and take flight when the season is right?

Join me this week as we consider some of the amazing and life-enriching possibilities in each of us. Stay with me. 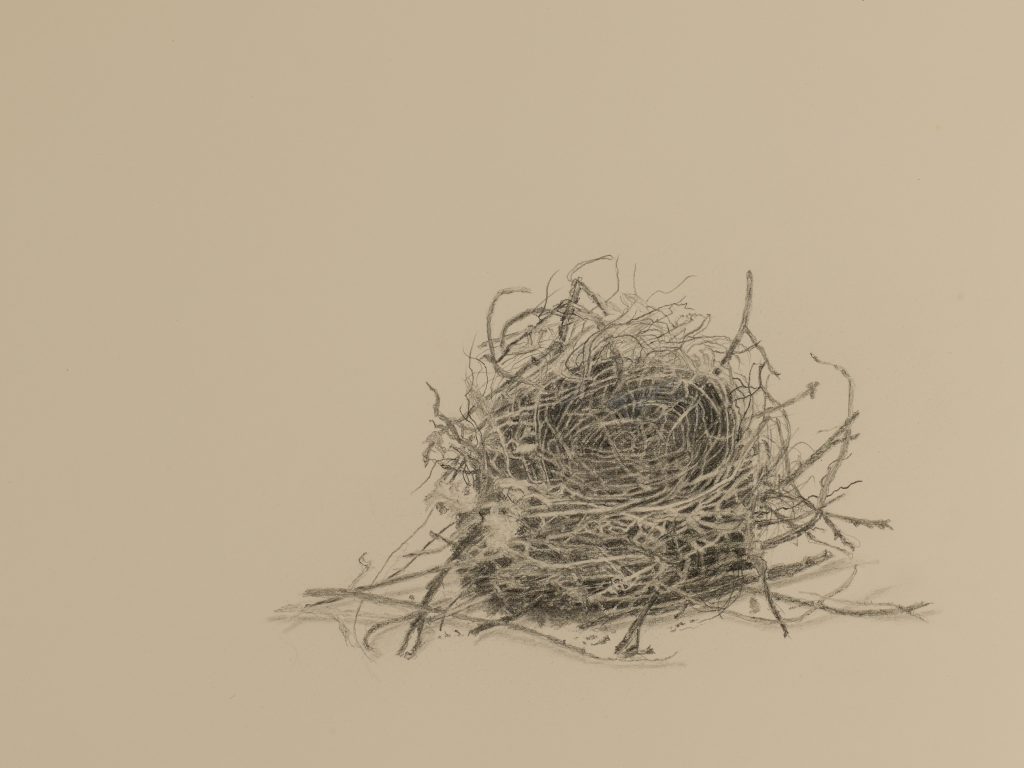 Last week, I shared a graphite rendering of a red-shouldered hawk feather. It’s part of an extended series of drawings that I’ll give as Christmas gifts. Almost half way through, and for reasons entirely my own, I’ve skipped ahead to what will be the last one in the series—a drawing of a cardinal nest I found on the ground at the edge of my garden several years ago.

For weeks, I’d been watching a pair of cardinals coming and going to a tucked-away spot hidden in the dense foliage of the Ligustrums that lined my back fence. Sometime later, when a powerful storm tore the nest away, I carefully picked it up and brought it into my studio to study it and photograph it for future reference. Last week, I felt the irresistible urge not just to draw it, but to push the limits of my abilities as an artist as far as I could, and to do everything I can to imbue the drawing with the transcendent and ineffable qualities that brought the nest into being and cradled the lives that emerged from it.

I’ve written before that I’ve long been fascinated by nests of all kinds. I consciously avoid ascribing human traits to birds or other animals, but while I’m drawing, I can’t help but wonder about the hidden urge—not to mention hidden wisdom and abilities—that cause birds to build nests in the ways and in the places they build them. I ponder how aware they might be of what they’re doing and what’s ahead of them as they lay their eggs and brood over them until they hatch.

I muse about what’s happening below the surface of any awareness they may have.

In the playfulness of my imagination, I can hear Mr. and Mrs. Cardinal sitting on a high branch in the corner of my garden while they discuss what’s about to happen in the weeks ahead.

“You know, Nick,” Mrs. Cardinal says, “I’m starting to feel that urge again. It’s about to be egg laying time. I’m sure you know what that means.”
“I do, Nora,” Mr. Cardinal says, looking at her over the top of his newspaper. “I was thinking about that this morning as I finished my second cup of coffee. Way I see it, we need to find a hidden place to build a nest that’s about five inches across. Then we need to get busy gathering sticks and twigs and grasses and maybe some bits of fur and a few feathers.”
“Yes,” she says, “strong enough to hold together, but soft enough in the middle to cushion the eggs, not to mention the fact that I’ll be the one spending most of my time sitting there while you’re galivanting off doing who knows what.”
She sighs and Mr. Cardinal rolls his eyes and flies off.

I know it doesn’t happen that way, but it tickles me to imagine it. Lacking thought or language, the process is driven by something much more subtle and mysterious than we’ll ever be able to fully understand. But then, so much of life is that way.

For a couple of seasons before the nest was torn away, I watched the cycles repeat themselves in the same place and in the same way. I don’t know if it was the same pair of cardinals building the nest, but it wouldn’t surprise me.

One afternoon while I was out watering, I became as still as I could and peeked in. For as long as I stood there, the bird remained motionless. The nest she sat on looked just like the one I’ve drawn. I wonder how many such cycles escaped my notice—how many other nests she may have built.

Last winter’s extreme freeze took out the Ligustrums and now I look out at wild vines slowly overtaking the high wooden fence. Somewhere nearby, the cardinals and countless pairs of wrens and sparrows and mockingbirds and jays and doves are building again. With unerring consistency, they follow the patterns and rhythms that are encoded into them.

The abundance of birds I see every day confirms that wherever and whatever they’re building, they’re having great success with their perfect architecture and with the labor-intensive execution of their designs.

I marvel at the wonder of it all as I reflect on some of the things I never dreamed would eventually show up in me or in my life.

After going through the sweeping changes I experienced twenty years ago, the life I’m living now is in many ways profoundly different from the life I lived before those things took place.

For example, I had no idea that I’d be living in my own studio, or that I’d be creating works of art that would travel the globe. I had no idea I’d be writing and producing these podcasts every week for the past four years. I had no idea it would be possible for me to become as patient as I am now or that I’d become so passionate about encouraging other people to live as fully and fiercely as they can, day by day and moment by moment.

I had no idea the world would look so utterly miraculous to me, that life would be so precious, that I could love so deeply, or that I would experience such grace and heartfelt gratitude.

When I reflect on it, though, I can see that all those things (and much more) were nested somewhere deep in me the whole time. I don’t doubt at all that they were waiting for the right moments to reveal themselves. Wisdom and patience and artfulness and compassion and a genuine love of life didn’t suddenly appear in me. They’ve always been part of me, though I’ll confess that for untold years, I kept them put away or didn’t realize that I had them to the degree that I know and experience them now.

Nevertheless, I’m still stunned by it all.

Everything I’ve shared with you today is a setup to ask what wondrous things are nested in you and waiting to emerge? This week’s Beautiful Questions are designed to help you ponder and explore exactly that.

Question One: When you look back on your life so far, what strengths or gifts showed up as a result of your struggles?

Question Two: In what ways would your life be different if you hadn’t struggled and overcome things you did?

Question Three: What finer qualities are you aware of that are beginning to emerge in you now?

Question Four: Are you willing to swing the doors wide open to even greater possibilities for your life?

Because there is so much available to you right now, I invite you to take your time as you consider this week’s questions. As your answers reveal themselves, write and tell me about them. I’m listening.