Sometimes even simple things can calm us or bring us peace. Now, more than ever before, that practice is a lifesaving one.

Join me this week as I share two stories about staying calm in the face of adversity. Stay with me.

As I did in a previous episode, this week I’ll share two stories that have to do with teacups. The first is from my own family history. The second, and longer one, is a story told to me many years ago about a Japanese tea master who remained sublimely peaceful in the face of mortal danger.

My earliest years were nomadic ones that opened a magical door to faraway places and distant cultures. Right now, I’m envisioning a photograph my father took when I was about three. In it, I’m squatting with a group of the diminutive dark-skinned mountain people in the Philippines. They were fascinated by my pale white skin and my shock of curly blond hair.

When he was later transferred to the Air Force base on the island of Guam, Daddy flew on ahead and found us a place to live. 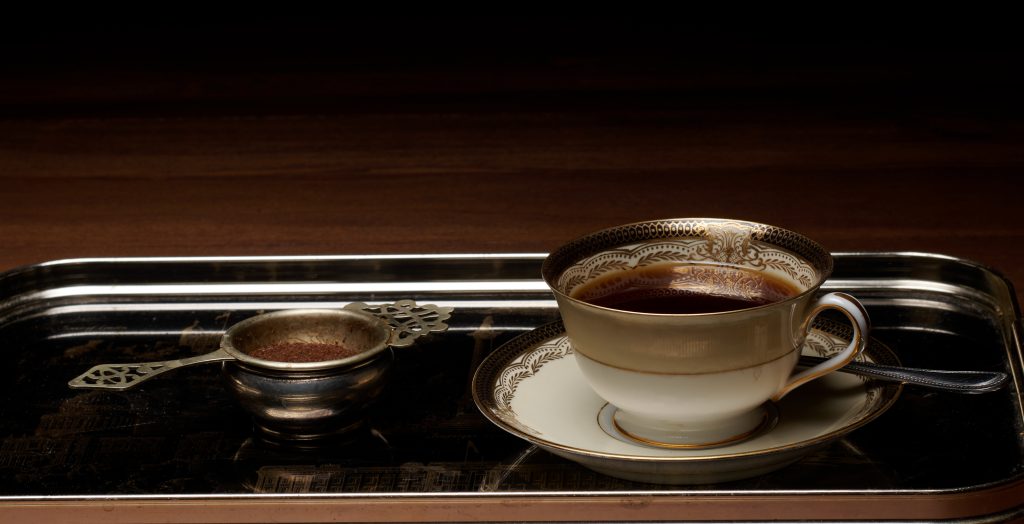 Before we arrived, he flew to Japan and bought fine china, crystal, and silverware, as well as kimono for my mother and older sister and me. When we arrived, he had spread it all out on a ping-pong table in the Quonset that would be our home. Smiling, he once told me it was the only table he could find.

For years, I’ve kept a cup and saucer and one of the cookie plates from that set of Noritake china. From time to time, as a quiet meditation, I’ll make tea and enjoy it in that cup, reflecting on all that’s happened since my father first brought it home. Though I have others, there’s something about drinking tea from that cup that causes me to think about the many blessings in my life. The practice grounds me and refreshes me and makes me peaceful.

When I’m finished, I stay as mindful as I can while I wash the cup and plate and put them back on the shelf until the next time.

[ brief pause as Japanese flute plays and fades away ]

Centuries ago in Japan, the emperor’s tea master had fallen gravely ill and was near death. Since the tea ceremony brought such peace to the emperor and everyone in the imperial court, runners were sent far and wide to find a suitable replacement.
But not one was found to be as adept as the one who lay dying.

Time passed before word came of Tanzen, a strange but humble man who lived alone in a remote village high in the mountains. Though his appearance gave him the look of a forest creature, it was reported that he performed the ritual of the tea ceremony with such grace and precision—with such artfulness and delicacy—that anyone who witnessed it would become spellbound.

When news of this reached the emperor, he summoned members of the imperial guard and gave them orders to find Tanzen and persuade him to come back with them.

So eager was the emperor that on the day Tanzen arrived in the royal city, there was no time to comb his tousled hair or take him out of his ragged clothes and dress him in ones more appropriate to sit before the court. So wild looking was he that when he walked in, many looked on him with judgment in their eyes, but not the emperor, who silently gestured to a place in front of him.

“Please,” he said in a voice that was respectful and commanding, “Make me tea.”

Smiling, Tanzen gently placed his wooden box on the polished stone floor beside him, bowed deeply, and then knelt and became absorbed in the purity and harmony of all that he was doing. So perfect were his movements that a deep tranquility fell over the court and those who watched became captivated, including the emperor, who looked on with reverence.

When at last Tanzen had frothed the tea to his satisfaction, tapped the whisk twice against the rim of the cup, and set it aside with its bristles pointing upward, he bowed again, and with both hands, lifted the cup to the emperor, who accepted it with a tear in his eye.

“Again tomorrow?” the emperor asked when the cup was empty.

After that, Tanzen was taken to his new quarters and told that as a member of the royal court, his old robes and sandals would be discarded. As soon as he had bathed and combed the tangles from his hair, he was given new sandals and dressed in silk robes that bore the imperial symbol. He was also told that as a member of the court, he was to carry a samurai sword and was taken to the sword master for instruction in how to comport himself.

“But I know nothing of swords,” Tanzen said. “I make tea.”
“There is not enough time for me to instruct you in how to wield it,” insisted the sword master, “but as a member of the imperial court, you will go nowhere without it. If it suits you, consider it to be nothing more than a tradition. After all, you’ll never be called on to use it.”

In less than an hour, that statement was powerfully challenged.

Having been released to wander the city for the rest of the day, Tanzen marveled at what he saw. On his way along a crowded street, he accidentally bumped into someone. When he turned around to apologize, he was facing an angry samurai who was about to draw his sword, when he noticed the royal symbols on Tanzen’s outer robe. As a way of trying to save face, the swordsman said, “Tomorrow, at this same hour, I will meet you on the bridge behind us. Prepare to lose your head.”

And with that, he strode arrogantly away.

Terrified, Tanzen rushed back to palace and to the sword master to explain what had happened. Saddened to hear it, the sword master said once again that it would be impossible to teach Tanzen how to defend himself.

“It takes years of practice to learn the way of the sword,” he said, “but I can at least show you how to keep from disgracing yourself or the emperor.”

“What brings you the greatest peace,” the sword master asked.
“Making tea,” Tanzen said. “It always calms me.”
“And how long does that take?” he was asked.
“I can do it in half an hour if I need to.”
“Good,” the sword master told him. “Tomorrow, go to the bridge half an hour before you are to lose your head and make tea. Then, when you are calm and focused, stand in the middle of the bridge, draw your sword and grasping the handle with both hands, and hold it above your head. That way, your opponent will have to cut through your arms and your life may be spared.”

So distraught was he that Tanzen slept not at all that night. Pacing the floor in the dark, he was sure that he was in what would be his final hours.

The next day, half an hour before the duel was to take place, Tanzen knelt in the middle of the bridge and made tea with greater mindfulness and greater care than he ever had. The crowd that gathered stood in rapt silence as they watched. Never had they seen anything more beautiful or more serene.

When he finished, Tanzen put his things back into the wooden box with great care, then stood in the middle of the bridge and did exactly as he was instructed. So peaceful was he that as he drew the sword and held it above his head, he closed his eyes and imagined watching a crane slowly flying across the face of the moon.

At just that time, the angry samurai who threatened his life arrived to defend his honor. But when he saw Tanzen, everything changed. There, at the center of the bridge, stood a man so calm and confident and courageous that he dared to close his eyes. At the sight of it, the man threw his sword to the ground and ran away in shame, and no one ever saw him in that place again.

Each of these stories speak of practices that bring serenity and focus from something as simple as making tea. That brings us to this week’s Beautiful Questions.

Question One: Regardless of how simple they may be, what healthy things do you do to calm yourself, even if it is only temporary?

Question Two: What things might you add that would contribute to your sense of peace, regardless of what’s going on around you?

Question three: How might you make doing those things a part of your experience every day or every week?

I can’t think of a time in our history when inner calm has been more necessary. Write and tell me what ideas come to you about this consideration.