Have you ever felt so overwhelmed by the number of things that you were facing—sometimes all at once—that you didn’t quite know what to do next?

Join me this week as I share a story what will help us take our time and become more efficient and much more effective as we take the steps we need to take. Stay with me.

One of the earliest stories I remember is that of a wise emperor who was known not only for his fairness, but for his unflagging devotion to the wellbeing of the people of his kingdom. For reasons he kept to himself, he knew that it was time for one of his three sons take his place. But which should it be? He loved them all, yet each was so remarkably different in the qualities they possessed and the ways they carried themselves.

Because the decision would affect the future of everyone in the kingdom for generations to come, the matter greatly trouble the emperor. One night in a vivid dream, he saw his sons kneeling in front of him in a contest that would determine which of them was most suited for assuming the throne and ruling the kingdom.

When he awoke in the middle of the night, a great peace came over him.

Relieved and happy, he drifted back to sleep. In his wisdom, he had seen that exactly the right things would take place and that his kingdom would be in the right hands. 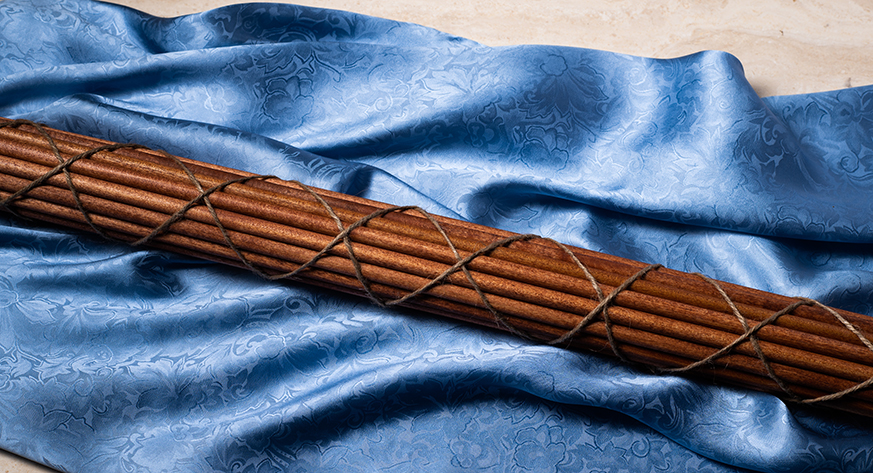 Word of the contest was sent far and wide and on the appointed day, a stir filled the royal court. With his sons kneeling side-by- side on the floor in front of him, the emperor placed before them a bundle wrapped in fine silk.

Bending down slowly, he opened it to reveal a group of arrows wrapped tightly together with strong cords. In a quiet and commanding voice, he announced to the court, “The one of my sons who can break all of the arrows will be the one who is best suited to rule my kingdom.”

With that, he sat back on his throne and nodded to a servant who rang a small bell. When the ringing stopped, he whispered to his sons.

“Whenever you are ready.”

The eldest son was a large and muscular warrior who bore the scars of many battles. Laughing out loud, he picked up the bundle with one hand and stood up. Closing his eyes, he gripped each end of it and pulled it against his knee with all of his might.

The muscles in his face tightening and he began to sweat as he strained harder and harder. The arrows creaked loudly but refused to break. Three times he tried, each time harder than the one before. And three times, he failed. Unable to hold back his anger, he tossed the bundle onto the stone floor. And though he thought about it, his love and respect for his father kept him from storming out of the room.

Wiry and smaller than his older brother, the middle son was known for his shrewdness and many people feared him. They were right to do so. Stories told in secret about what happened to those who had dared to cross him.

After a moment of deliberation, he stood up and placed one end of the bundle on the floor and the other on the edge of the first step. Then, after backing away several paces, he ran toward the bundle, leapt high into the air, and came down on the it with all of his weight.

Like a heavy spring, it tossed him backwards and he landed sprawled out on the floor with a loud thump. No one laughed as he got to his feet. Glowering, and with fire in his eyes, he sat back down and stared at the floor.

A hush fell over the court, and all eyes turned to the youngest son. Not frail, but much smaller than his older brothers, he was neither athletic nor shrewd. He leaned forward, carefully took the bundle into his hands, and place it across his lap, a curious smile widening as he looked at it.

Taking his time, he deftly untied the knots at each end of the bundle, unwrapped the cords that held the arrows together, and then, one at a time, snapped each of them in half with a sharp crack.

When he had broken the last of them, he bowed and looked humbly at his father, asking, “Like that?”

One thing I take from this beautiful story is that we handle our lives much more effectively when we deal with our challenges one at a time. I often think back to my First Cavalry unit’s motto in combat, “Yard by yard, this is hard. Inch by inch, it’s a cinch!”

When we try and tackle everything out in front of us, we get ahead of ourselves. Often, we become so entangled in the details before we get to them that we’re not as efficient or effective as we would be if we were to relax and deal with one thing at a time. It might be good to keep in mind that just like the idea of doing things perfectly, notion of multi-tasking is a myth.

As you ponder, you might ask yourself how many things are on your plate right now.

Another meaning we can take from the story is that just like the bundled arrows, we are virtually unbreakable when we work tightly together. I’m thinking about the people across the country who came together to cope with the recent winter weather and power outages.

I’m thinking of the people who are forming co-ops to share resources in ways that help everyone involved to thrive. I’m thinking of neighbors who are working together to raise community gardens. I’m thinking of how strong and enduring structures become when they are built brick-by-brick or stone- by-stone. I’m thinking of a group of young men I once watched as they lifted a car off the ground. The more of them that joined in, the easier it was to share the load.

Regardless of what you’re facing or how overwhelmed you’re feeling right now, how much added strength is available when you work with others as part of a team?

This week’s three Beautiful Questions focus on the built-in power of breaking things into manageable units and on the power of working together.

One: How many important or non-negotiable things are you dealing with right now, and what will happen when you focus on accomplishing them one-at-a-time?

Two: How have you successfully worked with others in the past to accomplish what mattered to you?

Three: What might you do this week to break things down into smaller units, and to collaborate with others in accomplishing the greater tasks?

Thank you again for joining me in these podcasts as we keep doing everything we can to respond to life in increasingly effective ways. As always, I’m open to your comments and feedback.