Help Along the Way

How did you get this far in your life? I can guarantee that you didn’t do it on your own. Join me this week as we consider who helped us along the way and how we might expand the gifts they gave us.

Today, I’m thinking of people who helped me along the way- people who contributed to my being where I am today. Some of them were directly helpful. Some played lesser but still important roles. Others were completely unaware of the effect they had on my life. And still others had no intention of being helpful, but in a left-handed way, provided me with the challenge, the motivation, or the inspiration I needed to refocus and keep going.

Whether they knew it or not, and whether their actions or words were intentional or accidental, I know that I could not possibly have gotten here on my own.

As I’ve led counseling and consulting groups for the past twenty- five years, I’ve illustrated that point by putting on demonstrations about the phrase: “Pick yourself up by your own bootstraps.” Standing where people can see the tall cowboy boots I wear, I’ll tell the group that I’m going to give them a remarkable demonstration of human levitation and that I am going to lift myself into the air completely under my own power.

After appointing a member of the group to be my “spotter,” I ask that person to watch me closely and then lead the others in clapping and cheering as soon as I leave the floor, even if it’s only an inch or so.

With that, I take a deep breath, slowly bend forward, and put my fingers through the holes in the sides of my boots as I close my eyes. Then, pulling as hard as I can, I grow noticeably red-faced, which appears to add to my sense of conviction. When I tell the spotter, “I don’t hear any cheering,” there is usually laughter. At that point, I open my eyes and show the group the redness in my fingers from having tugged so hard. More laughter! 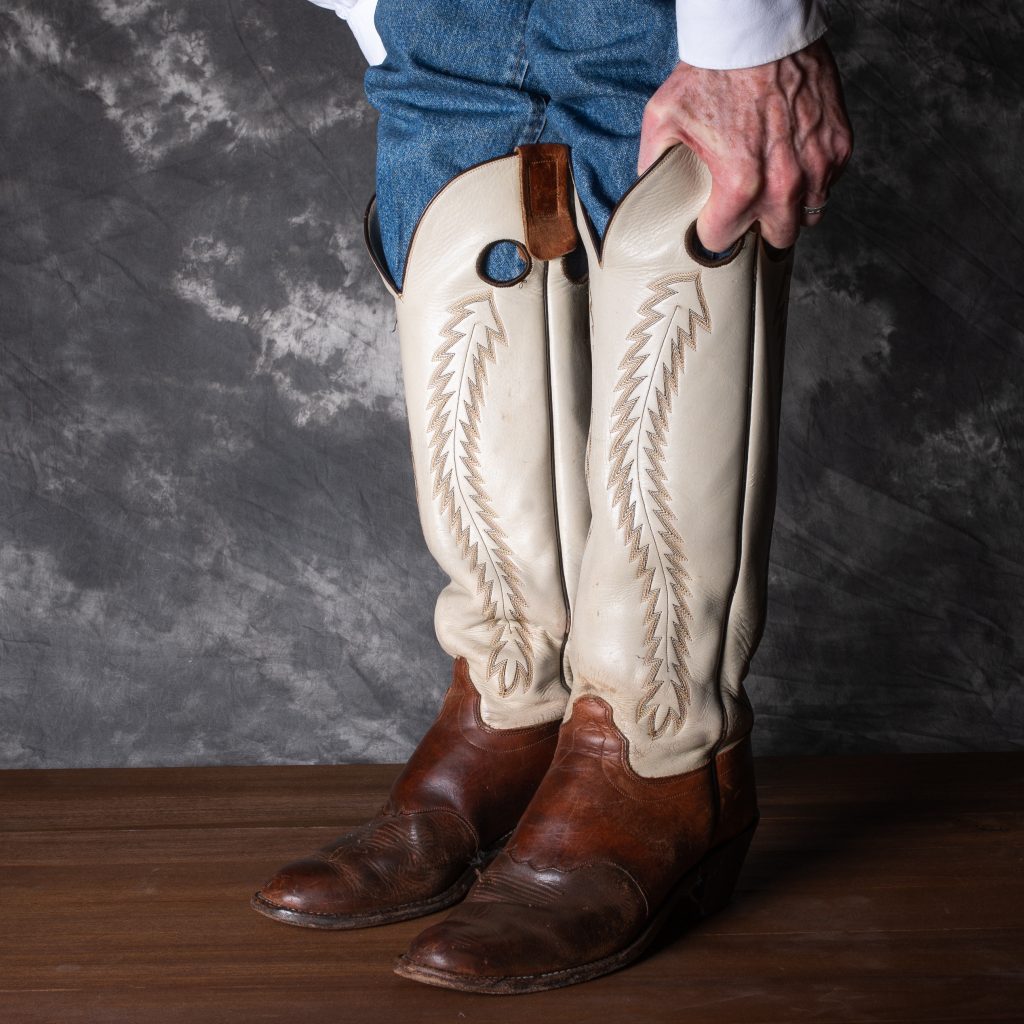 It may seem ridiculous, but the impact is memorable, and my point is well made. Regardless of the old military advertisements to the contrary, nobody, nobody is “an Army of one.” I could pull at my bootstraps with the strength of ten people and never once leave the ground.

So, what has all that to do with being helped along the way?

Think about it. Did you make the pen you write with? Or the paper? Did you invent and build the device on which you’re reading this? Can you comprehend even a fraction of what went into designing and manufacturing it, let alone the code required to turn ones and zeros into words and graphic images that are wirelessly transported through space and then coherently reassembled?

For that matter, did you raise the cows that gave the milk you poured over your cereal this morning? Did you perhaps plant and harvest the grain it’s made from? Did you mine the metal and forge the spoon you used? How about the chair or the stool you sat on? Or the bed you slept in? Did you build the bank where you keep your money? Do you even know the combination to the safe?

Obviously, the list could go on and on and on.

My bootstraps demonstration points to something more direct than those things. It leads us to consider the people who have lifted each of us, picking us up when we didn’t have the strength or the ability or sometimes, the will to do it on our own.

I think of Jose, the Mexican man who inspired me to learn about language by patiently teaching me my first Spanish words and phrases in the back of a gas station. His patient mentorship led me to become passionate about learning other languages.

I think of Mr. Huesers, the biology teacher who showed me how to use my own mind to learn in ways that are natural for me. His quiet guidance helped me go from failing to becoming an honor student.

I think of Dr. John Truelson whose medical wisdom and skills helped me survive cancer. That singular gift has made me passionate about every moment I am alive.

I think of JT Grant and Scott Gentling who taught me and inspired me to become an artist. I now live in my own studios.

I think of the unnamed man in church when I was twelve whose quite way of praying lit a fire in me to know God in my own skin.

I think of my mentor in Social Work graduate school who inspired me to learn how to learn in profoundly new ways.

I think of my longtime friend, Ken Cargill, who called me his “own private sanctuary” as he spoke at his ordination service decades ago. That statement revolutionized my understanding of what is to listen and to be a friend.

I think of my sister, Jude, telling me, “Don’t draw what you think you see. Draw what you see!” That encouragement is in my mind every time I draw or paint, and often when I’m just observing.

I think of my two younger sisters giving me the chance to learn what it truly means to take responsibility for someone’s safety and well-being.

I think of Mrs. Crowley, my fourth-grade teacher who kept me after school one day. Tying one end of a rope to a post, she began twirling it and told me to “listen for the timing of the rope, then jump in.” The next day, I was happily jumping rope with the rest of my class.

I think of Gene and Buddy asking me to baptize them in a river in Vietnam. Their request brought me even closer to God.

I think of Ruth, who on her deathbed taught me to read the Psalms by accenting every first-person singular pronoun. Her unbending faith helped shape mine into something far more personal and more meaningful.

I think of friends who have shown me the power of laughter and play and storytelling around the dinner table.

I think my younger brother offering me my first lesson in the meaning of unconditional love. Though it took me decades to understand it, that gift is now more alive in me than ever.

I think of the one who showed me what true acceptance looks like, refusing to judge or criticize me and helping me accept myself as I Am.

I think of the one who awakened the little boy in me when I thought he was long gone or tucked away so deep that I’d never see him again.

I think of the one who showed me what it means to consciously step beyond my own ego.

I think of the one who showed me what it feels like to “dance with life” and flow with what is.

If you’re anything like me, you could go on this way for hours and not run out of people to thank. Even then, we’d barely scratch the surface.

So, that brings me to this week’s five Beautiful Questions, which I’m confident you can predict.

One: Who helped you get where you are today?

Two: What specific things did they do or say that made a difference?

Three: To the degree it’s possible, what have you done to show your gratitude for the gifts they gave you?

Four: What are you doing to “pay it forward,” knowing that you will never be able to pay it back?

Five: Who have you already helped and how did you do it?

I’d love to hear about your answers. We have so many people to thank. As I consider that, I offer my gratitude to you. You inspire me to keep writing and recording these newsletters and podcasts, a process that’s changing me from the inside out.

I thank you for that!

As I say each week,
My Light with Your Light, 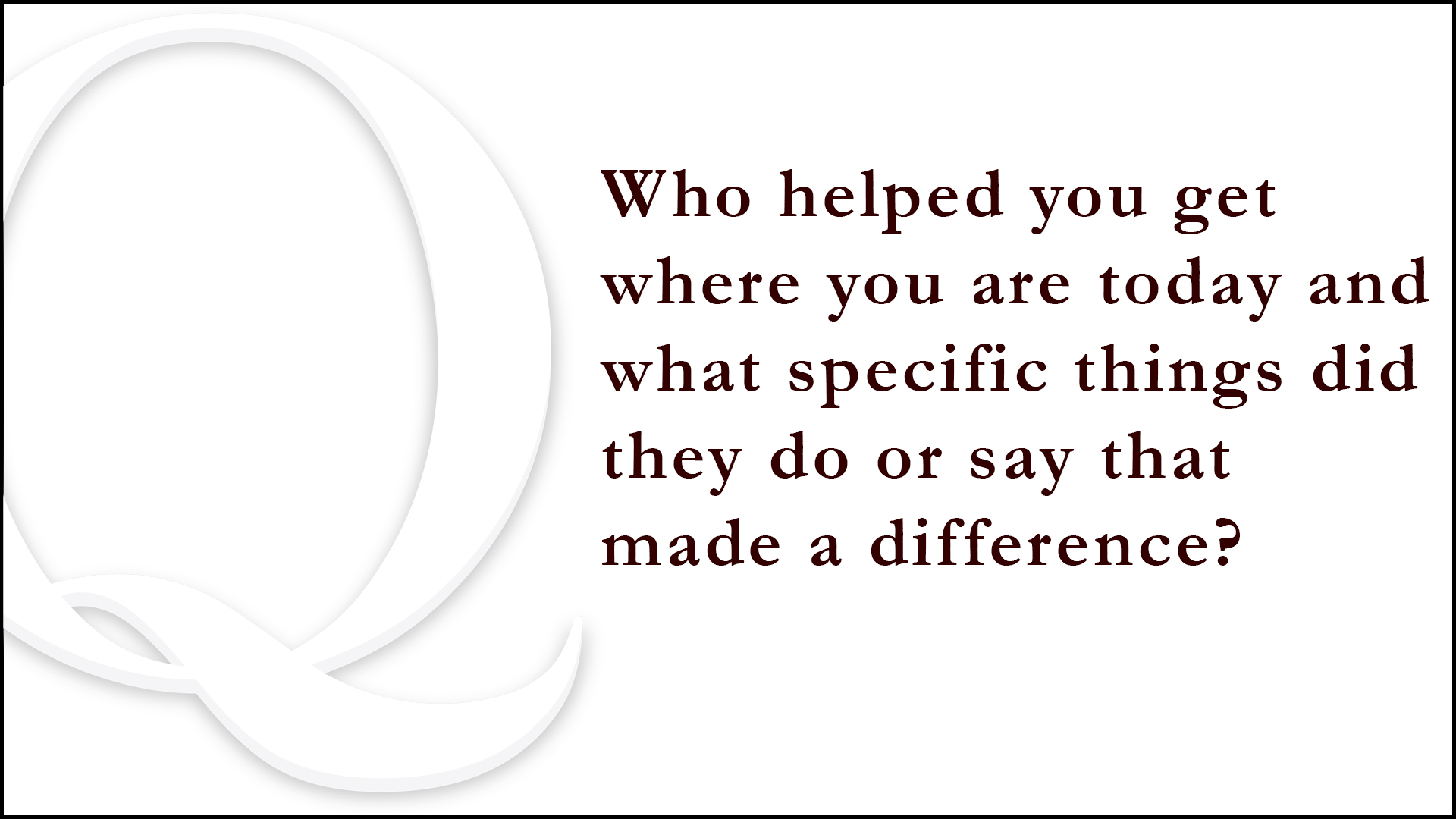