He Kept His Word

Once in a while, we’re told a story that is so compelling it stays with us as vividly as if we experienced it first-hand. Today, I offer such a story in the hope that you’ll find meaning in it and that it stirs something deep and abiding in you about the good that is still possible in people and in the world.

You’ll be glad you did.

About twenty years ago, I was told something heartwarming about a woman and her relationship with her father, Emo, who was a fighter pilot in Vietnam. Like many daughters, she adored her father and looked up to him as her very own hero.

She said that when she was just learning how to write, she wrote a note on a small piece of paper and handed it to her father when he came in from work. The note said, “I love you, Daddy!” He grinned as he read it and she swelled with pride. Seeing the look on her face, he knelt down and kissed her and said, “I will keep this forever.” When she innocently asked, “Really?” he hugged her and whispered, “I really will. I promise.” 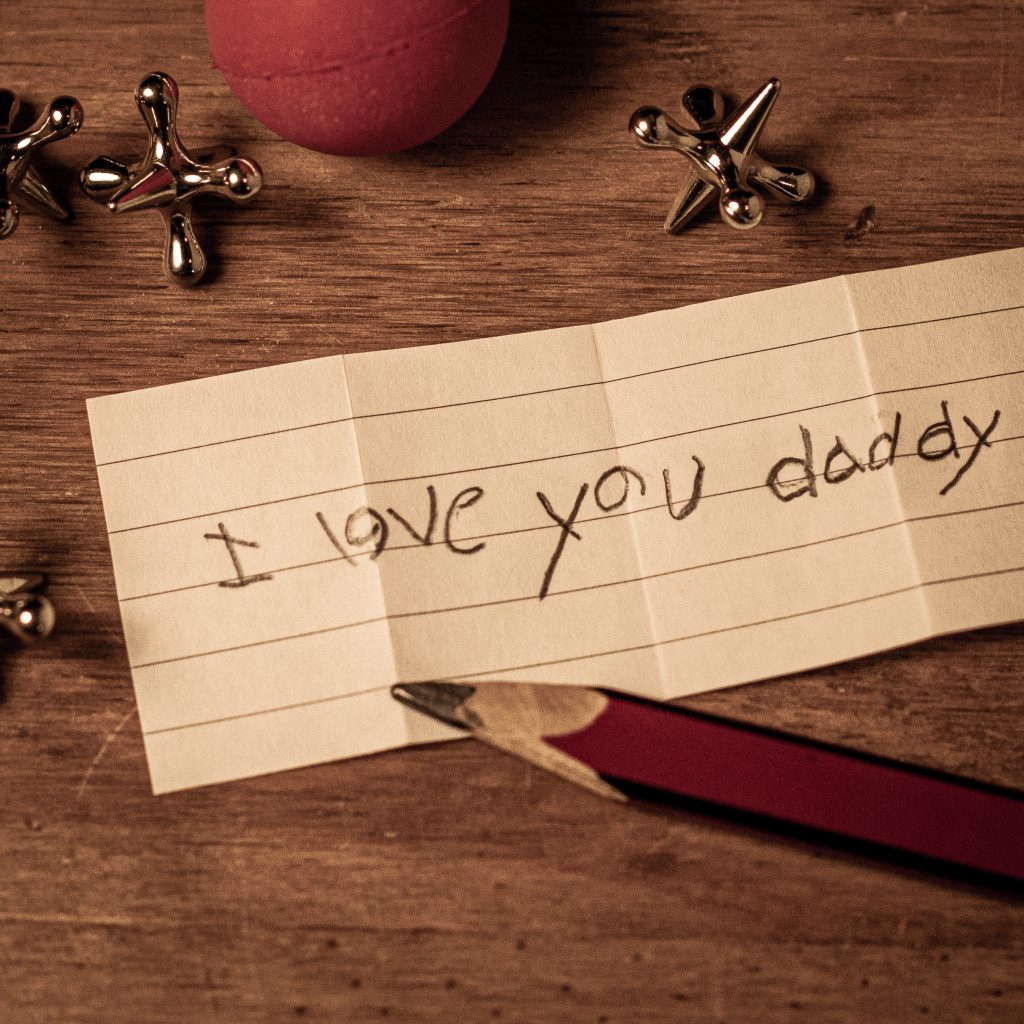 Over the passing years, she forgot all about it. After all, so much happens in the life of a growing child. Then, on a sweltering summer afternoon about a decade later, two soldiers came to their house to inform her family that her father had been shot down and killed in action in Vietnam. She and her mother and sister were devastated. The intense weight of their grieving would take a very long time to lessen even a little.

She told me that there were days when she would run out of tears, and then they would come again in torrents. And then she would feel numb. Then, seemingly out of nowhere, the tears would come again, and the feeling of loss would flood her. Such is the way with profound grief. Contrary to many clinical reports, it follows no discrete schedule and takes its own time.

Months later, soldiers came again, this time delivering a metal container about the size of a shoe box. One of the men said that it held everything that remained of her father’s personal effects.

Without a word, her mother nodded to the man, accepted the box and closed the door and locked it. Her daughters followed her to the kitchen, where she set the container in the middle of the table. When they sat down, they were unable to move or speak for several minutes.

After a long silence, her hands trembling, she slowly removed the lid and began taking out its contents, passing each of them to her daughters in turn. Out came Emo’s metal dog tags and the beaded chain he had worn around his neck. Out came his pilot’s wings and the insignia of his rank. Then came his pen and pocket-knife, his wedding ring, and his wristwatch, still keeping perfect time. You can imagine the tears that were shed.

When she brought out his wallet and opened it, she found the things you’d expect to find—his military identification card, his driver’s license and insurance papers, his social security card, a hundred dollars or so in bills, and a yellowed photograph from their wedding day.

Then came the unexpected.

Tucked in the back of his wallet, they found a small piece of paper that looked as if it had been opened and refolded so many times that its corners were frayed and darkened.

My friend said she wept with a mixture of surprise and sadness and pride as she saw it. Sure enough, her father had kept his word. So faded that it was barely readable, the childlike writing on the note said, “I love you, Daddy!”

When I was asked not long ago, “Who keeps their word these days?” I thought of Emo, and about my own remarkable father who was also a military pilot. I thought of my youngest sister and the necklace she wears that says, “Because I said I would.” I thought of good friends who stood by me when I was struggling so hard, I couldn’t see the path in front of me.

I thought of current friends who stay true to their promises, continuing to fight for what they believe in, even in the face of threats against them. I thought of people I know who refuse to give up on themselves or those around them. And I thought of you, listening to these podcasts week after week, and my promise to you that I will do all I can to keep using this forum as a voice for balance and hope and peace. I’ll never do it perfectly, yet I will stay focused and I’ll keep my word.

With all of that as a backdrop, I offer this week’s three Beautiful Questions.

Question One: Are you willing to bring to your awareness some of the people who have kept their word to you, and times when you’ve kept your word to someone else?

Question Two: As you remember, what changes in your view of the world and of yourself?

And Question Three: If you’re willing to make a singular promise to yourself during this time of uncertainty and sweeping changes, what will it be and how will you keep your promise in place?

When it clarifies and your ideas emerge about it, write and tell me. I’m listening.

My Light with Your Light 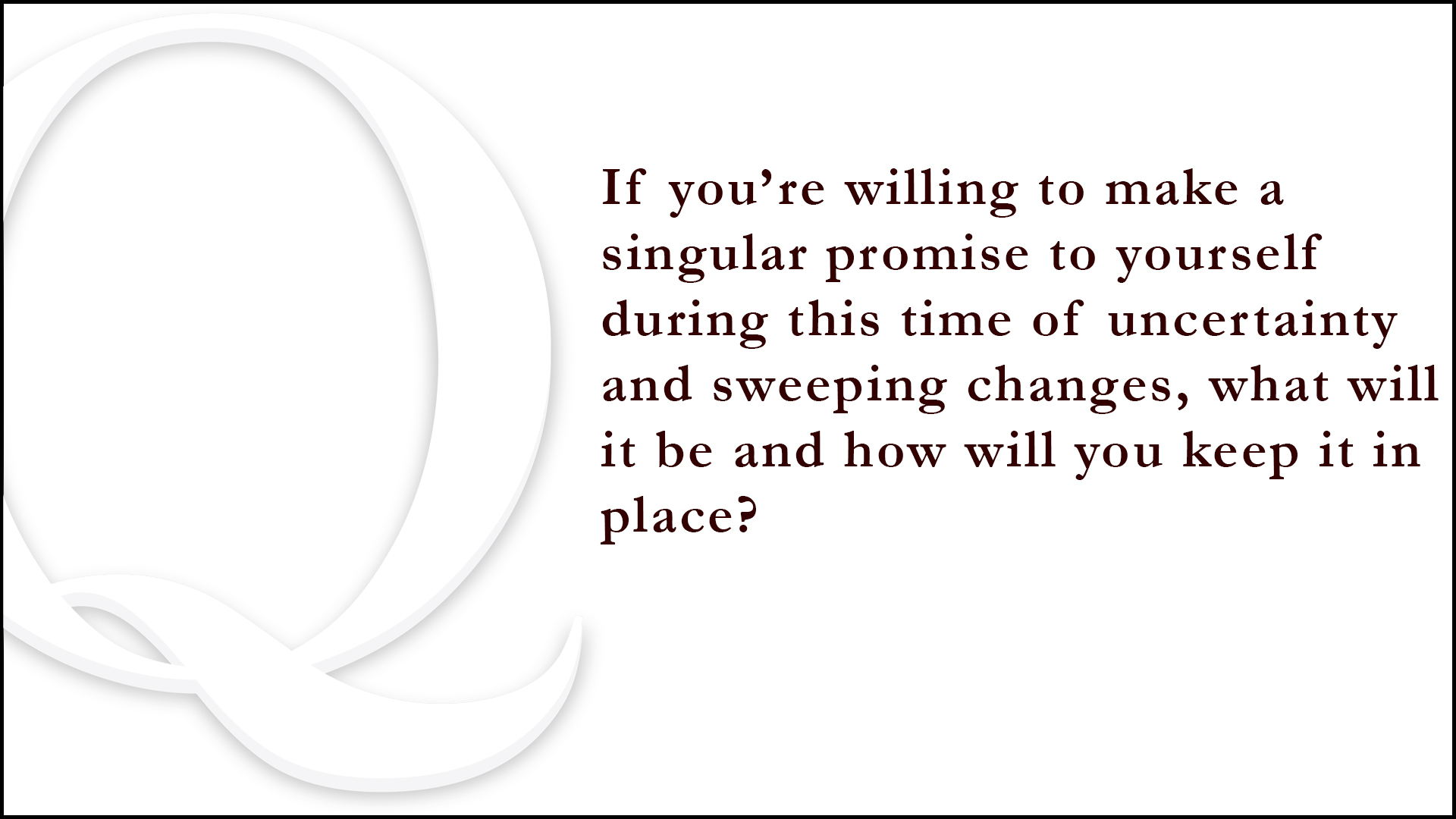