There is something universal to be found in the stories we carry and the ones we tell. It is in them that we weave the threads of our common humanity and the mystery of what it is to be alive.

Join me this week as I share several original stories that came out of my consciousness fully formed as I wrote them down. If nothing else, you can take a break from the world and be entertained for a while.

Today, a bit of storytelling.

As I step into the flow of creativity, I’ll occasionally allow my mind to drift a while and then write down whatever rises to the surface without editing or changing a word of it. For several years, I’ve been gathering these short pieces into a growing document and leaving most of them as they are, at least for now. Some have become longer works of fiction. Some are just right the way they are. And some few have taken on new form as poetry.

So, this week, in no particular order, I share with you ten “impromptu fragments” as a departure from the concerns that may be tugging at you or crying for your attention. Perhaps you can visualize each of them the way you might watch a scene from a movie or a play, taking them merely as entertainment. Perhaps one or two of them may offer something more. If that happens, write and tell me about it.

Either way, for the next few unhurried moments, I invite you to step with me into a world of fable and fantasy and freedom.

Here’s the first one.

It has long been told that in the old time—the time before legends—the time before charms were used or the first spells were cast—a tiny blue and white flower grew high in the mountains, sheltered from wind and snow and heavy rains between great crags of stone.

It’s said that this flower was of such delicate beauty that to catch even a whiff of it on the breeze or to look upon it with a mere glance would render even the strongest of men completely helpless. Their eyes would fill with tears, their hearts would be moved to tenderness, and they would sing sweetest of songs.

It’s been whispered that one who dared to pluck such a flower would be transformed at once into a fairy or a nymph, or perhaps a dragonfly or bee. And it’s rumored that even now, on certain nights, at a certain phase of the moon, in only one magically guarded place, such flowers still bloom.

An old one assured me when I was quite small that if you could speak the name of that flower as you touched it, and still remain who you are, then surely, surely, you had become a wizard.

Ah!, but I’m not asking you to believe such a thing. 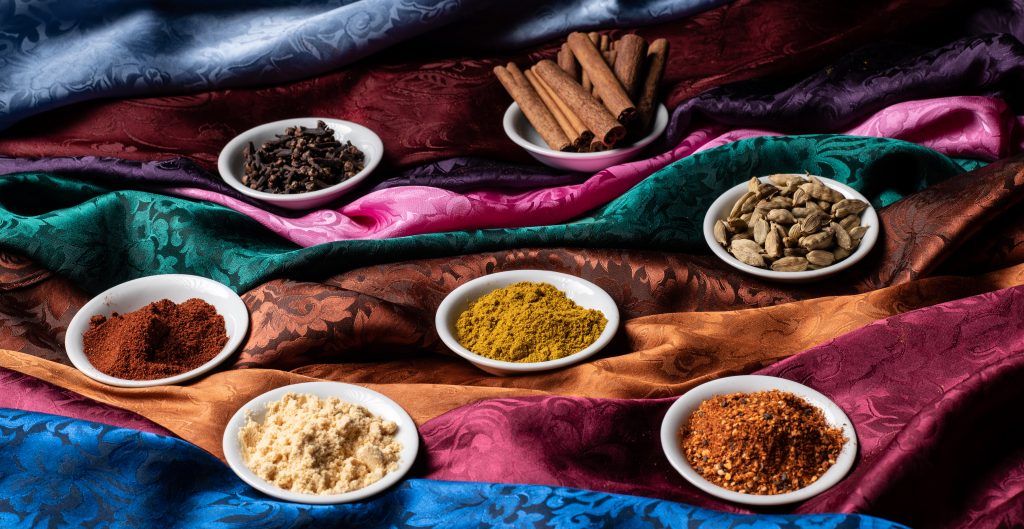 Gert dried her hands with her apron and stepped out onto the porch where a deliveryman held out a clipboard. Beside his feet lay a crumpled box with a handwritten label in the middle and a cluster of foreign stamps in one corner. From the look of it, the box had taken quite a beating and been taped back together more than once.

He pointed with the end of his pen toward the X he’d written above a line at the bottom or the receipt.

“You know folks in Madagascar?” he asked. “I don’t,” she said.
“Well, somebody there sure seems to know you.”

And with that, he smiled, handed her the package, walked to his truck and drove away.

Curious, Gert took the package inside and before setting it on the dining table, brought it near her face, inhaling the scent of spices she thought she knew, but couldn’t identify. Like the last three packages that had arrived weeks apart, each from a different country, there was no return address and no name or note on the

A Gesture of Respect

On the day of Solly’s bar mitzvah, his grandfather stopped calling him by that name, a name he always loved hearing the old man speak with his thick accent that was generations old, and yet singularly his own. From that day forward, the elder Levine addressed his grandson only as… Solomon.

Each time the word passed his lips, his eyes would close just so and he would nod, almost imperceptibly, in an ancient and unmistakable gesture of respect.

That day, by timeless tradition, and in the eyes of his grandfather, the boy Solly had become Solomon, the man.

Garret and The Mule

Half in and half out of the stall, Garrett lay flat on his back, trying hard to catch his breath. That old mule had kicked him square in the middle of his chest, an’ ‘e promised hisself that if he could get to his feet, he’d shoot the damn thing right where it stood and be glad to say “Adios” to his trouble.

But for now, he could hardly move and that old mule stood over him, looking down at ‘im, slowly chewed a mouthful of feed while a thick string of spit hung from one side of its mouth.

There were reasons Gadja was so fierce, reasons for her silence and the sharp look in her dark and always-searching eyes, but no one dared speak of them. At least not out loud. There were stories, of course, and when they were told, it was always in hushed tones and with eyes darting from one side to the other to be sure that no one else could hear. Often, the speaker would make the sign of the cross and whisper a prayer of protection.

Gadja had lived a long time in her small hut in the deep woods with only her cat and a crow that came and went as it pleased. Because of that, and so much more, some were certain she was a witch. A thing she would deny until, without a trace, on a day as bright and clear as this one, she vanished into thin air leaving only this silver pendant behind. I only show it to you now because I’m sure you will understand.

Knowing how different he was, Remington kept mostly to himself.

“After all,” he asked himself, “what other ten-year old has a name like Remington?” And what other kid did he know who did all their math homework in their head or studied calculus and Latin and classical music for the fun of it?

He was certain that no one else at Fortsen Elementary School could hear what other people were thinking. That part scared him sometimes, but he had learned to keep it to himself and did his best not to react to the sometimes-outrageous things he heard.

Then there was the problem of making things move or float in the air simply by seeing it in his mind and gesturing, just so, with his finger—a thing that became just a little easier every day.

As the truck and trailer pulled through the gate and turned onto the gravel road that led to the highway, leaving a thick trail of dust hanging in the air behind it, Kathy felt her pulse pounding in her neck and her jaw tightening.

The last of her horses… were gone.

Then, as if rousing herself from a dream, she pulled off her gloves, slapped them sharply against her thigh to knock off the dust, and stuffed them into the right back pocket of her jeans.

She turned and walked toward the house, her right eye squinting from the smoke of the cigarette that hung from her lip the way a man might smoke. When she saw Carl standing by the back door of the house barefoot in his tattered khaki pants and stained tee shirt, something inside her failed. After years of holding everything inside, she put the torch to her own fuse and went off.

“I swear to Almighty God, I never could stand you, Carl.”

As she said it, she lit another cigarette with the one she had just finished, took a deep drag, and kept talking through the smoke as she exhaled.

“I don’t care if you are my brother. I only put up with you bein’ here to help them horses, and now they’re gone, I cain’t for the life of me figure out why I should let you stay.”

Carl showed no reaction. Carl hadn’t spoken or uttered a sound in more than a year, but that’s another story.

Carl toed the ground a while, looking down at nothing in particular, then turned and went into the house without closing the door.

“Well, shit,” she said, flipping the still burning cigarette into the dark behind him.

A few minutes later, and with no particular destination in mind, Kathy was in Carl’s truck, driving to into the afternoon Texas heat as leaves and bits of hay swirled out of the pickup bed. In a couple of hours, she’d cross the Oklahoma state line, certain that she would never go home again.

Somehow, that was alright with her. The only thing she wanted was to get away.

“Ya’ll set those things over there beside the chifforobe,” mother said. “We’ll put ‘em away after dinner. Now go on an’ wash up and come to the table. Pea, you go call your daddy. He’s out back talkin’ to those men from the express office. An’ for the Lord’s sake, wipe that dirt offa your face.”

Pea grinned as he pushed the screen door open and went outside. He’d never admit it, but he loved the way she smiled at him when she pretended to be upset.

“Sheldon,” the boss said, taking his spit-soaked cigar out of his mouth and pointing with it over his shoulder, “the boys over in finance say you’re doing a good job down here.”
“Marvin,” I said. “What?” the boss asked.
“Marvin. My name is Marvin—Marvin Lipshitz.”
“Yeah, sure kid. Whatever! So, Sheldon, like I was sayin’…”

On Friday evenings, they would sit on the front porch of my grandfather’s Rhode Island house drinking cold bottles of Pabst Blue Ribbon beer and listening to the fight on the radio—my father, my grandfather, my uncle Robert, Mr. Hodash from next door, and his son, Janusz, who was home on leave from the Army.

As the smell of beer and cigarettes hung in the air, the commercials told us to “Nnock, knock, knock for Nickerbocker Beer,” and to “use Gillette Blue Blades to look sharp.”

Then a bell would ring and the announcer would call out, “In this corner…,” going on and on about the pugilists who were about to beat the stuffing out of each other.

And then Sonny Somebody-or-Other and Max So-and-So would do exactly that while the crowd cheered wildly in the background.

But I didn’t care about any of that. I was too busy watching my father joking with the other men. After all he’d been through in the war, it was good to hear him laugh like that.

But what did I know of such things? I was only a boy.

This week’s Beautiful Question is a simple but important one.

What rich stories do you carry in your mind and heart, and how do they shape the way you see the world and move through it? 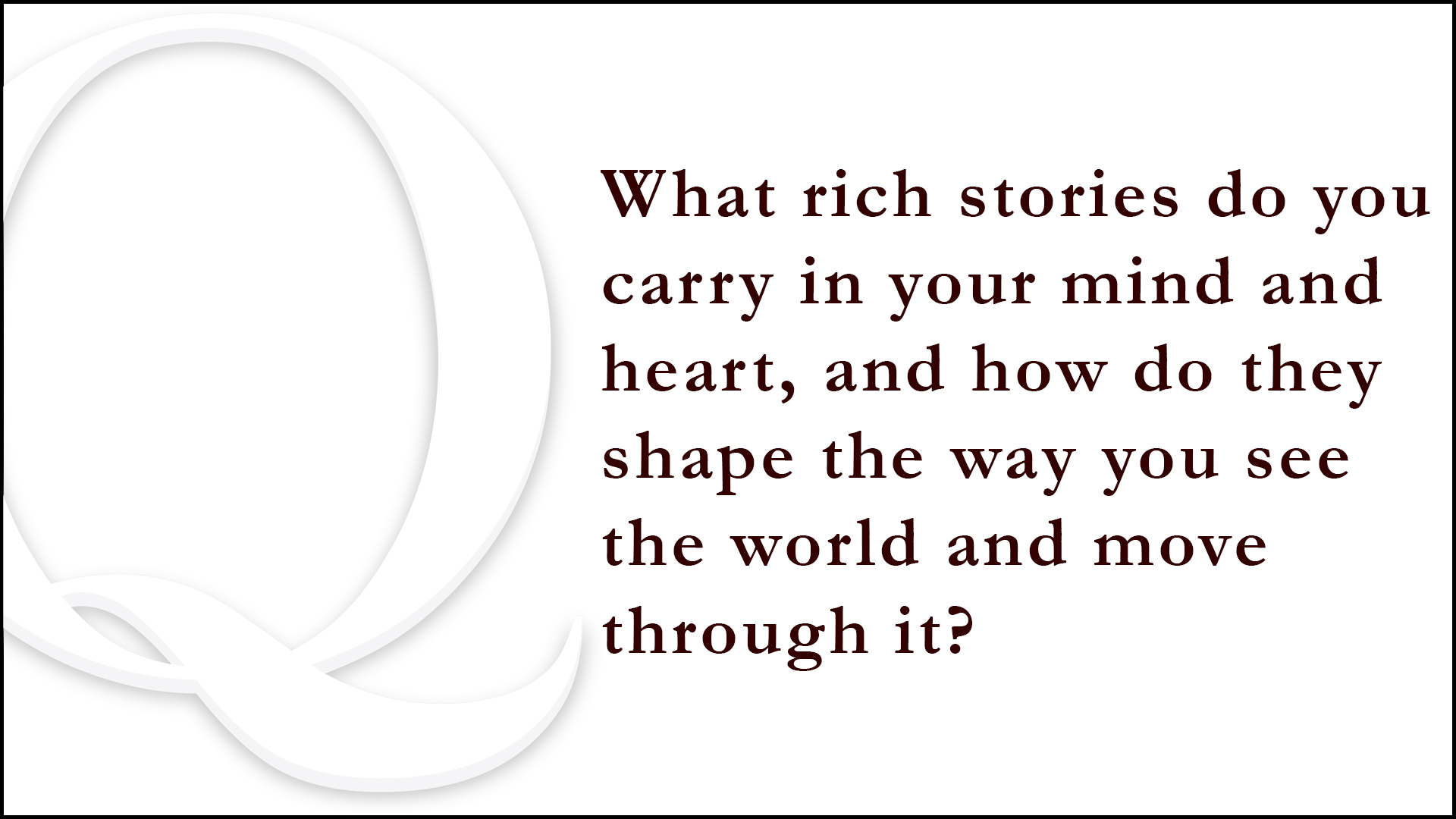