I’m continually amazed at how good questions lead us so naturally to good answers, and how beautiful questions lead to even better answers. When we open ourselves to the things we don’t know, we open the doors to discovery and greater understanding.

I’m Scott Lennox and you’re listening to The Beautiful Question, a weekly consideration of things that matter every day.

In a previous episode, we looked at ways of trusting the unfolding of the path in front of us as we take each step.

This week, we’ll revisit that consideration from a different angle by following the remarkable north country journey of a hunting dog almost ninety years ago. Stay with me.

[ brief pause as music fades out ]

In nineteen thirty-six, when my father was fourteen, his family traveled hundreds of miles by train from the small village of Pubnico in Nova Scotia to Ottawa, Canada. Not knowing how long they’d be gone, they took his dog Rex with them. 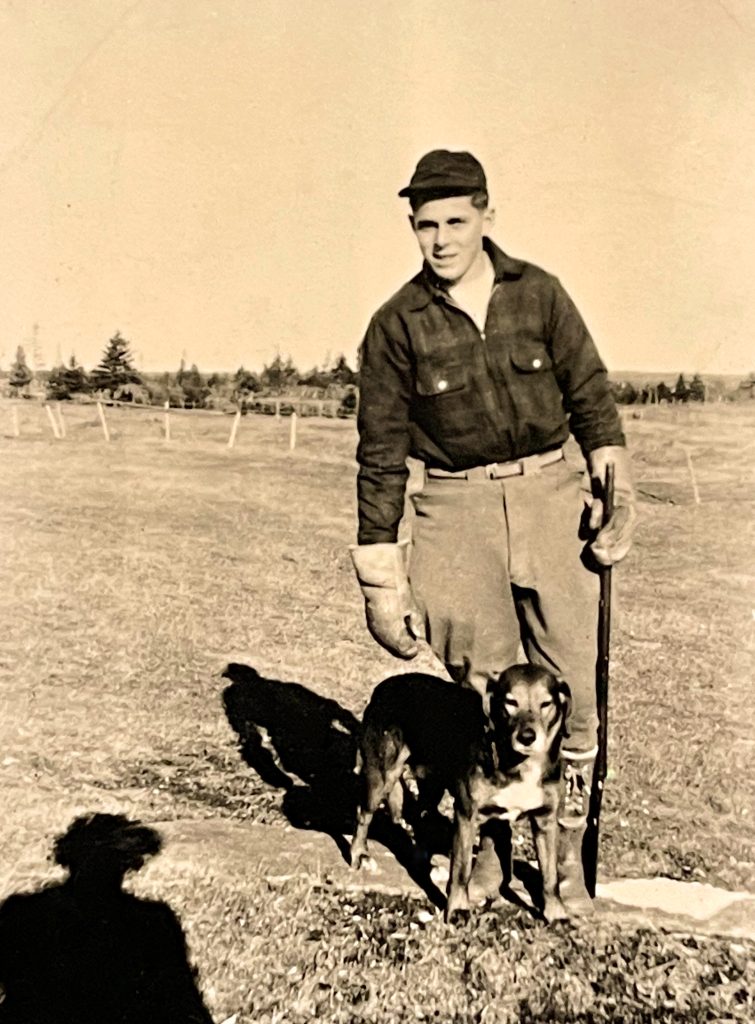 As close as they were, there was no way he was going to leave his best friend behind.

Getting ready for the trip, my grandfather built a sturdy wooden crate so Rex could ride in the train’s mail car. Each time they stopped, my father would go back and let him out for a few minutes, then put him back in the crate, making sure he had food and water. He told me he did this over and over until somewhere near the mid-point of the trip when they stopped in Maine. When he went back again to check on him, the crate had come open and Rex was gone.

With the help of the conductor and several other passengers, they searched the train and the area around the station. But when Rex was nowhere to be found, there was nothing they could do but be on their way. After all, the train had a schedule to keep.

I remember Dad telling me that he was upset but faced the obvious and resigned himself to the situation.

A couple of months later, his family received a telegram from neighbors back in Nova Scotia telling them that Rex found his way home and that he looked fit and happy. As if making such an arduous journey wasn’t remarkable enough, they also reported finding what was left of a wire rabbit snare wrapped around Rex’s neck. Blood had dried where some of his fur had been rubbed off, but he was alive and well.

As a boy, I heard stories of dogs getting caught in snares and struggling so hard they suffocated and died. But Rex was no ordinary dog. Instead of tugging against the wire and choking himself to death, he stopped and chewed through it until he was free. As proof of his efforts, there were well-worn grooves in several of his teeth.

As deeply reserved as my father was, I don’t recall him talking about their reunion, but I’ll admit to imagining what it was like when he and his family finally got back to their little town in Nova Scotia.

Each time I heard Rex’s story, I grew more impressed with his innate abilities to control himself and solve problems and find his way home. Look at a map of Nova Scotia and Canada and you’ll understand my fascination.

I’ve asked myself more than once what inner compass was guiding him. How many borders did he cross? How on earth did he cross the St. Croix River? How did he feed himself? How long did it take him to chew through the wire and free himself? Besides the rabbit snare, what other dangers did he face? Why didn’t he give up? And what inner strength kept him going?

Without a doubt, Rex’s astounding accomplishment caused me to ponder the built-in wisdom and intelligence and endurance he carried. It also inspired me to look more deeply into some of the things that are built into each of us as human beings.

We can never know what capacity Rex had for navigating and reasoning or what was encoded into his canine brain, but by whatever name you choose to call it, I’ve come to trust the wordless wisdom that guided him and brought him safely home.

Ponder this if you will. Have you ever gotten through a challenge and realized later that you weren’t quite sure how you did it? Without consciously reaching for it, have you ever come up with a solution to a problem that just “felt right” at the time? Have you ever known things without having learned them? Have you ever taken a half-step forward because something beyond words or conscious knowing prompted you to do it? You didn’t think about it. You just did it. Have you ever rightly said “Yes” to your situation when three-dimensional logic would have told you “No?”

The answers to each of these questions could easily stand as an example of the kind of wordless wisdom I’m referring to.

You’ve probably heard that we’re using only a small percent of our available mental capacity. Most figures are somewhere in the low teens. But in light of that, I have to ask, “What if greater intelligence is operating in us all the time and we’re simply not noticing when it happens? What if much more of us is ‘online’ than we’re aware of? And as we become intentional about it, how might we start paying closer attention to our quieter or deeper consciousness—our wise and compassionate inner self—the part of us that is always guiding and instructing us?”

This week’s Beautiful Questions are designed to help shed light on exactly that consideration.

Question One: How have you found your way in the past that revealed a deeper awareness than your conscious thinking mind?

Question Three: Are you willing to spend a few minutes each day actively inviting that deeper part of you to reveal itself?

It may seem at first glance that these questions point to something vague or unreachable, but I promise they do not. They point to what is alive and available in you right now. Write and tell me what you discover as you find your way back to yourself. If a dog can find its way home from hundreds of miles away, you certainly can from where you are.

I’m glad we can engage this way every week as we consider things that matter and what to do about them. If nothing else, I hope you feel inspired to look more deeply at ways of caring for yourself. You deserve that.

And each week at thebeautifulquestion.com, you can read the illustrated transcript of each podcast as you listen. We’ve also included an archive of all previous podcasts, including guided relaxation audios that can help you practice letting go on a daily basis.

If you find these podcasts useful, I encourage you to share them and tell others about them. That’s a great way of helping me get a voice of calm and collaboration and balance and encouragement out into the world.