Be Where Your Hands Are

There are countless ways to take ourselves out of the moment. Most of them have to do with what’s happening in our head. But is any of that necessary?

Join me this week as we consider ways of flipping some of our habits and coming back into the fullness of the present. I think you’ll be glad you stayed.

In the background, you’re hearing a recording of my friend, Ross Holmes, playing We Fall A Sacrifice inside the Alamo here in Texas. He spontaneously composed the piece while standing there alone and then debuted it on Davy Crockett’s fiddle to honor those who fell in that battle. Ross is a phenomenal fiddler and composer. Working closely with his collaborator Aaron Malone, he recently completed his American Fiddle Suite, which is yet to be released.

After a year of cancelled tour dates due to the pandemic, Ross is finally getting back on the road with The Nitty Gritty Dirt Band. He’s also toured with Mumford and Sons, Bruce Hornsby, and Cadillac Sky, and has played with most of the major musicians in Nashville and across the country. I’ve included links to some his music at the end of this podcast, including the piece you’re listening to now.

A couple of years ago, Ross became so inspired by a phrase I use to keep myself focused that he asked me if I would send it to him in my flourished handwriting so he could have it tattooed on the inside of his forearm.

The phrase is, “Be where your hands are.” 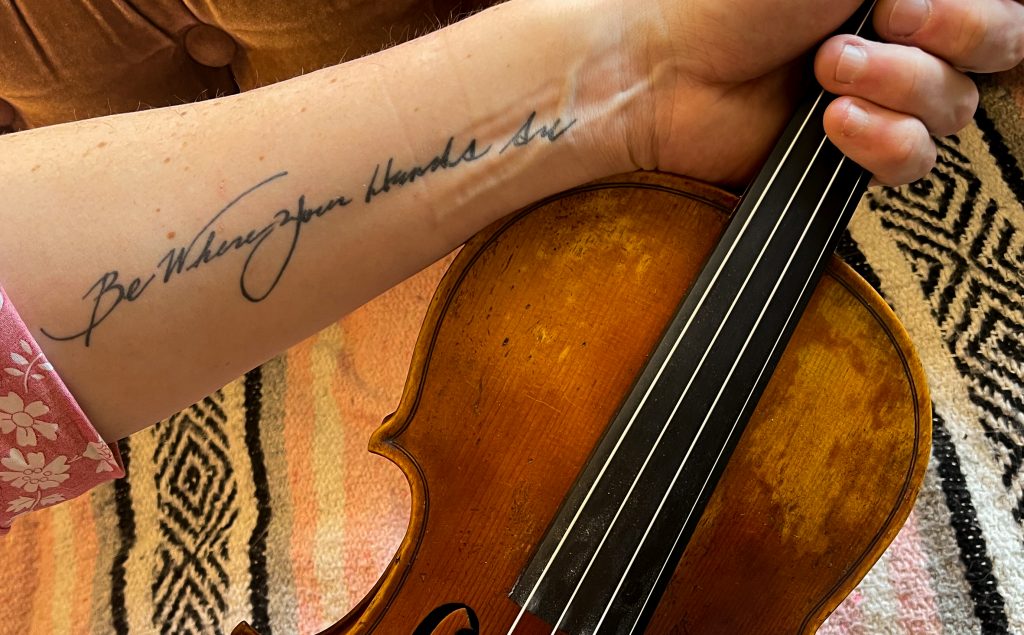 I have no idea where or from whom I first came across it, but “Be where your hands are,” is some of the wisest counsel I’ve ever received. And though it’s far from a new idea, the result of putting it into practice can be downright revolutionary.

How much of my life have I spent figuratively looking over my shoulder into the darkening shadows of the past or trying to peer over the horizon as I worried about an unpredictable and unknowable future? How many ways have I allowed my past experiences to negatively influence the moment I was living or to cancel it altogether? In how many subtle and perhaps not so subtle ways does that still happen? How many times have I diminished or cancelled the richness of the present moment because my thoughts were somewhere else or because I simply wasn’t focused in the here and now? How many conversations or shared moments did I miss?

In a recent conversation with my best friend, the importance of “Be where your hands are” came whispering back to me. While we were talking, I realized that I had been spending way too much time in my head. Instead of being relaxed and fully present, I was analyzing and weighing and assessing nearly everything without even knowing why. After a gentle nudge, I realized the truth of it and made a point to shift back into the present. As I did, our conversation deepened and became much more satisfying without either of us having to lift a finger to make it happen.

What I did on the inside was rather like going into the electrical panel in my head and flipping a few switches back to their correct positions. I didn’t have to do anything dramatic. It wasn’t about that. It was a matter of paying closer attention and bringing myself back into balance—back into the here and now.

I think you get the idea.

In the conversation that followed my making that shift, the result was a quietly amazing. Any thoughts I‘d been having of an imperative or an agenda fell away. The habitual sense of pressure that so often shows up in the background of my thinking faded almost completely. I was able to relax and more fully enjoy the conversation for what it was instead of trying to take it somewhere it that wasn’t destined to go in that moment. As far as I can tell, my friend had much the same experience.

So, now let’s go back and take it half a step deeper. Let’s look at “Be where your hands are” again as we intensify the first word in the phrase.

We spend endless time performing or projecting or even struggling with what’s going on in our lives. What happens when we allow ourselves to simply BE in any given moment—when we don’t overthink what we’re doing and behave spontaneously instead? What changes when we give ourselves full permission to authentically BE where our hands are, behaving naturally without forcing anything at all?

It’s not about what we’re doing. It’s a matter of simply being.

If you’d like to explore that a bit, here are this week’s Beautiful Questions. I invite you to consider them slowly.

One: What changes will take place each time you allow yourself to return to the present and simply “Be where your hands are?”

Two: In what ways have you been preventing yourself from doing that?

Three: How much fuller or more pleasant will your experience be as you let go into it?

Four: What will be different in the ways you communicate with someone or spend time with them?

Five: What will change within yourself?

I look forward to hearing from you as you sit with these considerations and relax into something new.

Thank you for joining me in these podcasts as we keep doing what we can to respond to life in increasingly effective ways. As always, I’m open to your comments and feedback.